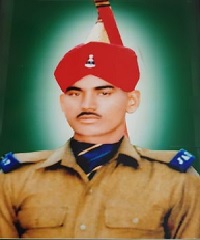 Sep Arjun Ram Baswana hailed from Budhi village in Nagaur district of Rajasthan. Son of Shri Chaudhari Chokha Ram Baswana and Smt. Bhanwari Devi, Sep Arjun Ram was born on 5th October 1976. He completed his primary education from his native place and further studies in Nagaur. He had keen interest in sports right from his younger days and excelled in many fields like Kabbadi, hockey and wrestling.

His interest in the Armed Fores also grew with his age and eventually he joined the Army on 20 October 1996 at the age of 20 years. He was recruited into 4 Jat Bn of the Jat Regiment, an infantry regiment well known for its brave soldiers and various battle exploits.

During 1999, Sep Arjun Ram Baswana’s unit 4 Jat battalion was deployed in the Kargil sector of J&K. In the early part of May 1999, unusual movements were noticed in the Batalik-Yaldor sector and consequently, Indian Army units had commenced aggressive patrolling of the area in their AOR (Area of Responsibility). Similarly in the first two weeks of May 1999, several patrols were conducted in the Kaksar Langpa area of Kargil district, to check for the presence of intruders and also see if the snow had retreated enough for the summer positions to be re-occupied. On 15 May 1999, Sep Arjun Ram Baswana along with Sep Naresh Singh, Sep Bhika Ram, Sep Mula Ram, and Sep Bhanwar Lal Bagaria was tasked to undertake a patrol to Bajrang Post in Kaksar sector under the leadership of Capt Saurabh Kalia.

After a continuous crossfire with Pakistan forces from across the LOC, Sep Naresh Singh and his comrades ran out of ammunition. They reported this matter to the base camp and called for reinforcements. However before the troops could arrive, they were surrounded by a platoon of Pakistani rangers and captured alive. As the patrol did not return, another patrol was sent by the unit subsequently under the leadership of Capt Amit Bhardwaj. This event led to the discovery of hundreds of guerrillas, who had established fortified positions on the peaks of the hills deep inside the Indian side of the Line of control, with sophisticated equipment and supply lines back to Pakistan-controlled Kashmir.

Sep Arjun Ram Baswana and his comrades including Capt Saurabh Kalia were held in captivity from 15 May 1999 – 7 June 1999 for about twenty-two days and subjected to torture as was evident from injuries to their bodies when they were handed over by the Pakistani Army on 09 June 1999. Post-mortem examinations revealed that the Pakistanis had tortured their prisoners very badly in gross violation of international conventions. The post-mortem also confirmed that the injuries were inflicted ante-mortem (before death). Sep Arjun Ram Baswana was a brave and determined soldier, who laid down his life in the line of duty.