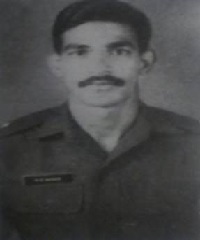 2nd Lieutenant Rajinder Singh Nagar was born on 23 August 1964 in Machgarh village in Faridabad district of Haryana. Born in a military family to an Army veteran Lt Col CS Nagar, 2nd Lt Nagar studied BA (Hons) in the University college from Kurukshetra city of Haryana.  2nd Lt Nagar always wanted to follow in the footsteps of his father and serve in the Army, so decided to pursue his dream after his college.

2nd Lt Nagar passed the Combined Defence Services Exam and was commissioned into 16 Sikh battalion of the famed Sikh Regiment on 14th June 1986. In his first field assignment itself he was selected to go to Sri Lanka as part of IPKF.

By Oct 1987, 2nd Lt Rajinder Singh Nagar’s unit was operating deep inside Sri Lanka and was in thick of combat operations. As the battle for Jaffna progressed, the IPKF advance came under intense and vicious opposition from the LTTE Tigers. Fighting in built-up and an as-yet unevacuated Jaffna, the Indian High Command insisted that the slow advance was, in addition to Tiger resistance, more a result of reluctance on the part of the IPKF to use heavy weaponry to clear LTTE defenses. On October 15/16 the IPKF stopped its advance to stabilize the front. Palay, the major operations headquarters for the 54th Infantry Division, was also secured from Tiger attacks. At this time the IAF undertook a massive airlift to reinforce the 91st with three brigades and heavy equipment, including T-72 tanks. Now reinforced, the IPKF resumed the battle for Jaffna on 17 Oct.  On 17 Oct 1987, 2nd Lt Nagar’s unit was tasked to link with Jaffna fort.

However during their advance from road Junction for linking up with the Jaffna Fort, the troops came under heavy militant fire from Manippe. The whole battalion was pinned down and in such conditions, 2nd Lt Nagar, took lead of the column and encouraged them to move forward braving all odds.  He spotted a heavy machine gun position from where they were being targeted and realized that it had to be silenced to continue their advance and avoid any attrition on their side.

2nd Lt Nagar took immediate decision and charged the militants’ heavy machine gun position with grenade. After the grenade exploded, in a daredevil action he charged the position physically. During this action 2nd Lt Nagar got hit by a burst of bullets and collapsed. The extraordinary courage and leadership of 2nd Lt Nagar motivated his troops and they finally ran over the enemy positions and reached their objective. 2nd Lt Nagar was martyred at very young age and left behind an inspiring legacy for the soldiers of his regiment. 2nd Lt Nagar was awarded awarded “Vir Chakra”, for his conspicuous courage inspiring leadership and supreme sacrifice during the war.

The Citation for the Vir Chakra Awarded to him reads:-

Second Lieutenant Rajinder Singh Nagar was deployed in Sri Lanka as part of the Indian Peace Keeping Force. His battalion marched out on the 17th October, 1987, from road Junction for linking up with Jaffna Fort. En- route, they come under heavy militant fire from Manippe. The whole battalion was pinned down. In such circumstances, Second Lieutenant Nagar, took initiative and urged all the men to move forward and himself want ahead of the column braving all odds. he spotted heavy machine gun position from where volume of fire was coming. he charged the militant heavy machine gun position with grenade and after the first grenade and after the first grenade exploded, he stood upright and charged the position physically. The militants took a close aim and shot this brave young soldier. The courage shown by the young officer, enthused the whole battalion with a fighting spirit. It did not look back and carried out all the given tasks and was among the first few in 41 Brigade to contact Jaffna fort and carry out further task.

Second Lieutenant Rajinder Singh Nagar displayed courage and valour in the face of the militants and laid down his life in the highest traditions of the services.