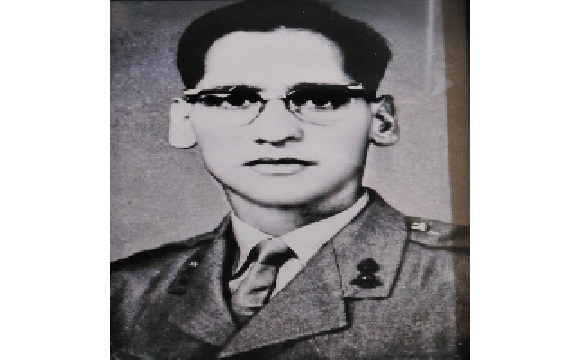 2nd Lt Indra Kumar Gupta was born on 04 Feb 1942 in Baraut in Uttar Pradesh. Son of an Army officer Col Ishwar Chand Gupta and Smt Nirmala Gupta, 2nd Lt Indra Kumar had a sister Veena Kumar and brother Arun as his siblings. 2nd Lt Indra Kumar's father served in the Army Ordnance Corps and was his inspiration to don the military uniform. He always nursed the idea of serving in the Army like his father and continued to follow his dream while growing up. Eventually he joined the Army and was commissioned on 08 Feb 1964 at the age of 22 years.

He got commissioned into 40 Medium Regiment of the Regiment of Artillery, a combat arm of Indian Army well known for its booming field guns and other heavy weaponry. As a young second lieutenant, he joined his unit and soon got involved in various field operations. As the war clouds gathered on the horizon in early 1965, 2nd Lt Indra Kumar Gupta's unit got deployed on the western border and he got the opportunity to take part in active operations in very early part of his career.

During Sep 1965, 2nd Lt IK Gupta's unit 40 Med Regt was deployed in Khem Karan Sector of Punjab under the operational control of 4 Inf Div. The epic battle of Asal Uttar was fought in Khem Karan Sector of Punjab between 6- 10 September 1965. The famous 4 Infantry Division with 2(I) Armoured Brigade was defending this sector. At the outbreak of the war, Khem Karan was lost to the enemy and the division withdrew to Asal Uttar approximately 20 kms along Road Khem Karan – Bhikkiwind – Amritsar. According to Pakistan’s ambitious master plan, their armoured division was to invest Harike by afternoon 8 September and then head for the capture of the Beas Bridge by next day in the evening.

In accordance with fresh instructions from Western Army Commander, Lt Gen Harbaksh Singh, no further withdrawal was permitted and 4 Infantry Division was to hold Asal Uttar at all costs. 2 (I) Armoured Brigade was to deploy 3 CAV towards North up to Rohi Nala with 9 HORSE guarding the Southern flank. 40 Medium Regiment was deployed in support of armoured regiment operating forward of defences at Asal Uttar. From 6 September 1965, onwards 2nd Lt IK Gupta was functioning as the forward observation officer with 3 CAV and was deployed with the armour between Asal Uttar and Chima village to prevent outflanking move by the enemy from the north.

2nd Lt IK Gupta rose to great heights of courage and aggressive spirit by engaging the enemy tanks with accurate and effective fire of 5.5 medium guns, whose shell weighed 80 pounds. This fire which rained on the enemy Pattons, played havoc and caused them to flee for cover. During this time, the enemy kept on trying all kinds of maneuvers to bypass the position at Asal Uttar. They were very effectively engaged and suffered heavy tank casualties. 2nd Lt IK Gupta and 3 CAV had succeeded in preventing the repeated attempts to bypass up to the afternoon. 2/Lt IK Gupta was continuously observing the movement of enemy tanks from his well entrenched position and directing his mediums to good effect. However, in the evening of 8 September 1965, his position received a direct hit from a Patton which resulted in serious injuries to both his legs. Profusely bleeding, he was immediately evacuated to field hospital at Patti, where he succumbed to his injuries, the next day.

The movement of enemy in the northern flank was thus prevented by the deployment of 3 CAV , forcing him to attempt the outflanking from the south with fresh tanks. The southern flank held by 9 HORSE, was carefully selected to cover the cultivated sugar cane fields between Village Valtoha on one end and other resting on River Beas. They were in hull down positions, waiting for a chance to engage the enemy tanks. Most enemy tanks got bogged down in the night of 9 / 10 September and were sitting ducks early morning. In the engagement which followed the enemy GOC was seriously injured and arty brigade commander died on the spot. The enemy lost 97 tanks (destroyed) and 28 captured intact with crew. The operations on the northern flank under 3 CAV with the excellent support provided by 2nd Lt IK Gupta, laid the foundation for this decisive victory.

2nd Lt IK Gupta was a valiant soldier and an officer par excellence who led from the front and laid down his life in the line of his duty following the highest traditions of the Indian Army. 2nd Lt IK Gupta is survived by his sister Smt Veena Kumar and brother Shri Arun Gupta.