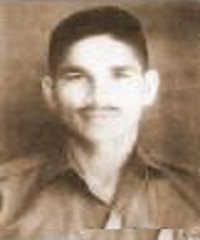 Second Lieutenant Hawa Singh hailed from Mirzapur village in Hissar district of Haryana. Son of Mr Sheokaran Singh and Mrs Chand Kaur, 2nd Lt Hawa Singh followed his childhood dream and joined the Army after completing his studies. He was commissioned into 4/5 GR of 5 Gorkha Rifles, a regiment known for its valiant soldiers and numerous battle honours.

During 1971, 2nd Lt Hawa Singh’s unit 4/5 GR, got deployed in the Eastern sector and took part in one of biggest assaults on enemy forces before the 1971 war. The battle of Atgram complex, fought on 21 Nov, 1971 between the 5 Gorkha Rifles and the 31 Punjab of Pakistani Army, was one of the first engagements between the two opposing forces that preceded the Indo-Pak war of 1971 and also one of the first large scale assaults launched by the Indian army against East Pakistani forces before the 1971 war. The battle was fought on the border village Atgram, in the Sylhet district of then East Pakistan , approximately 35 Kms from Sylhet town. The village lay across the Surma river , which served as a de-facto border, separating East Pakistan from the  Cachar district of Assam. The target of the Indian operation was the Atgram complex. Situated two kms inside the International Border across the River Surma, Atgram served as a major road communication centre , connecting it with Zakiganj to the south opposite the Indian Border town of Karimganj.

As per the attack plan 4/5 GR was tasked to capture the Atgram Salient by first light 21 November 1971 and advance further towards Charkhai and secure Sarkar Bazar, which lay approximately 4 Kms west of Atgram. The plans for the attack, drawn up by the CO, Lt Col  A B Harolikar, was aimed to surprise the enemy forces by infiltrating, and establishing road blocks to prevent reinforcements from Sarkar Bazar from the west Zakiganj to the south. This meant that to reach the Atgram, 4/5 GR troops had to cross the River Surma, infiltrating between Pakistani defences of Raigram and Amalsid, proceeding through four kms of marshes and launching the assault on Atgram complex from the rear. The force was then to proceed and clear the Border Outposts. The C Company and an Adhoc Force, was tasked to setup the road blocks and hold the approaches, while the main attack on Atgram was to be carried out by A and D Companies. To achieve maximum possible surprise, as well as a psychological factor, the main attack was planned with Khukris. 2nd Lt Hawa Singh was the  commander of one platoon of A company.

As planned 4/5 GR crossed River Surma in the earlier part of the night of 20 November 1971. C Company and Commanding Officers Group were first to cross with the help of pneumatic boats, established firm base across the river for battalion to pass through and move in between Pakistani BOP’s. The assaulting troops {A and D Company} including the platoon of 2nd Lt Hawa Singh neared the objective in the later part of the night. At about 0430 Hours on 21 Nov 1971, when A and D Company, led by their commanders, with CO in the centre, launched fierce Khukri assault and as the dawn broke captured Atgram. Pakistanis were caught by surprise and met their end with raw courage of Indian soldiers. The assaulting platoons led by 2nd Lt Hawa Singh and Capt Praveen Johri fought with gallantry and sheer dare devilry. However during the fierce fighting, 2nd Lt Hawa Singh got seriously injured and was martyred.

A battalion of Gorkha Rifles was given the task of capturing an enemy position in an area in the Eastern Sector on 21 Nov 1971. The enemy was holding a well fortified position supported by medium machine guns. During the assault, 2nd Lt Hawa Singh was seriously wounded by enemy fire. Undeterred and regardless of his personal safety he pressed his charge and killed five enemy personnel. His daring example inspired his company to capture the objective. Later he succumbed to his injuries.