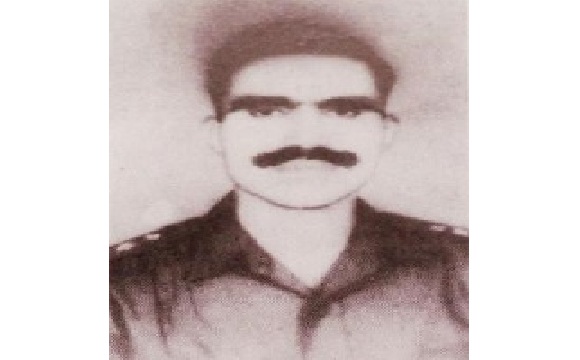 Second Lieutenant Bahadur Singh was born on 15th April 1945 in Koil village of Mirpur district in Pakistan. After the partition his family got settled in Ramgarh district of Jammu and Kashmir. Son of Shri Karam Chand, 2nd Lt Bahadur Singh did his schooling from Government High School Ramgarh in J&K. Later, he joined the Army at the age of 24 years on 14th June 1970.

He was Commissioned into 10 Sikh LI of the Sikh Light Infantry Regiment, an infantry Regiment known for its brave soldiers and rich history of various battle honours. Very early in his service career, he got involved in the thick of operations as border tension arose with Pakistan in 1971.

Though the Indo-Pak war officially commenced on 03 Dec 1971, when the Pakistani Air Force attacked 11 Indian Air Fields, the border skirmishes had started months before that when the refugees from across the border had started pouring in as a result of atrocities committed by the Pakistani forces. Prior to the outbreak of open hostilities 10 Sikh LI battalion had got deployed on the western border and had been engaged in a number of operations during aggressive patrolling that had been undertaken. 2nd Lt Bahadur Singh’s unit, 10 Sikh LI was deployed in Rajasthan under the operational control of 85 Infantry Brigade.

By the night 12/13 December, 10 Sikh LI had penetrated more than 80 Kms deep into the Pak territory. On 14 Dec, 10 Sikh LI was tasked to capture Parche Jiveri village (now called Bahadur Nagar) as part of ongoing operations. As planned, the battalion launched its attack in the night of 14 Dec. The assaulting companies ran into a mine field and Maj Arora of the battalion got severally wounded. 2nd Lt Bahadur Singh under the leadership of his Commanding Officer, Lt Col Basant Singh then spearheaded a daring attack against a stiff opposition from the main defences of ‘Parbat Ali’ on the out skirts of ‘Naya Chor’ (Sindh).
The‘ Parbat Ali’ feature was a dominating sand dune heavily fortified with LMG/MMG bunkers and high density mine fields. It was occupied by 21 Frontier Force of Pak Army and was very crucial to the overall objective of Indian Army in that sector. On 15th December 1971, 2nd Lt Bahadur Singh along with his comrades was tasked to capture the enemy defence position at ‘Parabat Ali’.  In this attack, the assaulting troops came under heavy artillery and medium machine gun fire and suffered casualties. 2nd Lt Bahadur Singh noticed an enemy medium machine gun firing from a bunker on a flank. Realizing the importance of silencing this gun, he sensed that the enemy MMG had to be silenced at any cost. He then in a daring move led a charge on this post without caring for his own safety. He managed to silence the gun but while doing so, was hit by a burst of the medium machine gun fire. He later succumbed to his injuries and was martyred.
2nd Lt Bahadur Singh was a gallant soldier and a gritty officer, who led from the front and laid down his life at the age of 26 years in the line of his duty. 2nd Lt Bahadur Singh was given the gallantry award, “Vir Chakra” for his courageous action, leadership and self sacrifice.

On the 15th December 1971, a Battalion of the Sikh Light Infantry was ordered to capture the enemy defence position at ‘Parabat Ali’ in the Rajasthan Sector. During the attack, the assaulting troops came under heavy artillery and medium machine gun fire and suffered casualties, Second Lieutenant Bahadur Singh noticed an enemy medium machine gun firing from a bunker on a flank. Realizing the importance of silencing this gun, he with complete disregard for his personal safety led a charge on this post and silenced the gun. In the process, he was hit by a burst of the medium machine gun fire and died soon after reaching the object.

In this action, Second Lieutenant Bahadur Singh displayed courage and leadership of a high order.