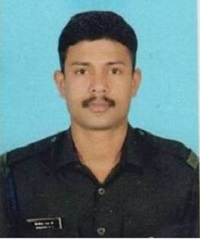 Sapper Sreejith M.J was born on 19 May 1989, at Paruthipully village in Palakkad district, Kerala. He completed his Schooling at Kottayi high school and later passed out from the Industrial Training Centre in Lakkidi as a diesel mechanic. In 2008, Sapper Sreejith joined the Indian Army and was inducted in Army’s Engineers Corps in September 2009.

Sapper Sreejith lost his father when he was quite young. He took responsibility for his family at a very early stage of his life. He built a new house for his mother Smt Usha Kumari and grandmother Smt Karthiyayani Amma. Sapper Sreejith’s sister Sreeja is married and stays at Panamanna near Ottapalam.

During Feb 2017, Sapper Sreejith was deputed to serve with 44 Rashtriya Rifles battalion, deployed in J & K for counter-insurgency operations which were deployed in Shopian district of J & K and were engaged in operations against the militants on a regular basis. The unit had to maintain a high state of alert at all times with soldiers ready to undertake operations at very short notice. On 22 Feb 2017, the security forces had received specific information about the presence of some hardcore militants in Kungoo village in Shopian district of J & K. A decision was taken to launch a joint operation with elements of 44 RR and J & K Police SOG (Special Operation Group) on the night of 22/23 Feb 2017 to flush out the militants. As planned the joint assault team reached the suspected area in Kungoo village on the night of 22/23 Feb 2017 and launched the cordon and search operation. Sapper Sreejith was part of the assault team comprising other soldiers of the 44 RR battalion and J & K Police.

However, the militants probably had been tipped off and could not be found in the village. The team consequently decided to return to the unit but when the team had reached Mulu Chitragam along the way, militants belonging to Hizb-ul-Mujahideen attacked the team. The militants launched the attack by firing indiscriminately at the convoy, leaving seven soldiers injured, including two officers. Though the attack was sudden, the troops quickly reorganized themselves and retaliated forcefully. However, during the heavy exchange of fire, several soldiers got injured. The injured soldiers were shifted to the Army Hospital, but three soldiers including Sapper Sreejith, Sepoy Vikas Singh Gurjar, and Lance Naik Ghulam Mohiuddin Rather later succumbed to their injuries. Sapper Sreejith MJ was a gallant soldier, who laid down his life at the age of 27 years in the service of the nation.