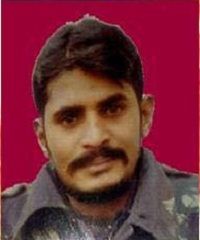 Sapper Sada Gunakar Rao hailed from Atisurikaviti village of Srikakulam district in Andhra Pradesh. Son of Mr. Sada Malleswara Rao and Mrs. Jayamma, Sapper S Gunakar had three elder sisters. After completing his education he had joined the Indian Army in 2012 and was recruited into the corps of Engineers. Later he was deputed to 1 RR unit deployed in J & K for counterinsurgency operations.

During 2018, Sapper S Gunakar’s unit was deployed in Kulgam district of J & K and was engaged in operations against the militants on a regular basis. On 10th April 2018, information was received from the intelligence source about the presence of terrorists at a house in Wani Mohalla in Khudwani village of Kulgam district of J&K. Based on the information a decision was taken by the security forces to launch an operation to flush out the terrorists. The operation was launched by a joint team of the Army, Special Operation Group(SOG) of J & K police and CRPF at around 11:30 pm.

The joint team swung into action and the suspected area was cordoned off. On being challenged the terrorists fired at the troops and a fierce gun battle ensued thereafter. The gun battle continued for over 12 hours till the morning of 11 Apr 2018. However, during the heavy exchange of fire Sapper S Gunakar of 1 RR sustained serious injuries and was shifted to 92 Base hospital in Srinagar. Later he succumbed to his injuries and was martyred. Sapper S Gunakar displayed raw courage and determination in the operation and laid down his life in the line of his duty, in the best traditions of the Army.