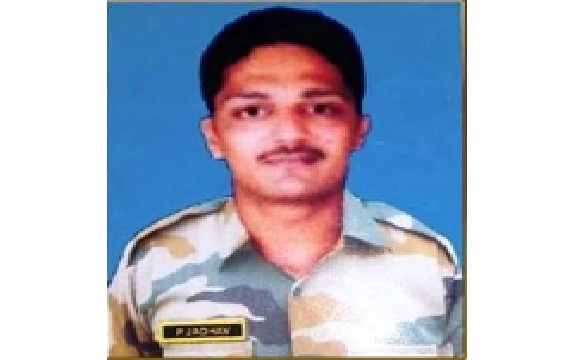 Sapper Prakash Jadhav hailed from Budihal village in Chikkodi taluk of Belagavi district in Karnataka. Son of Shri Pundlik Jadhav and Smt Sharada Jadhav, Spr Prakash Jadhav was inclined to join the Armed Forces since his younger days and eventually got selected to join the Amy after completing his school studies in 2007. He was recruited into the Corps of Engineers, one of the oldest arms of Indian Army.

After serving for few years, Spr Prakash Jadhav got married to Ms Rani in 2016 and the couple had a daughter Shravani. By 2021, Spr Prakash had put in over 14 years of service and had worked in varous operational areas with very challenging work environments. Spr Prakash Jadhav was later deputed to serve with 1 RR Battalion, deployed in J&K for counter-insurgency operations.

During 2018, Spr Prakash Jadhav’s unit 1 RR was deployed in Anantnag district of J & K and was engaged in counter-insurgency operations. As the area of responsibility of the unit was insurgency prone area, the troops had to maintain a very high level of alert at all times. On 26 Nov 2018, the security forces had received information from the intelligence sources about the presence of some hardcore militants in Redbani Bala village of Anantnag district . After analyzing the information it was decided to launch an operation to neutralize the militants. On 27 November 2018 in the wee hours, a cordon and search operation was planned in Redbani Bala village by the troops of 1 RR battalion. Spr Prakash Jadhav was part of the team that was assigned the task of launching the operation.

In the meantime, Spr Jadhav was shot and got injured. Even in the injured condition, Spr Jadhav fired at the other terrorist and managed to eliinate him. Meanwhile, the fire of petrol bomb had spread throughout the house. Spr Jadhav being seriously injured could not extricate himself and was martyred. Spr Prakash was a gallant and gritty soldier who laid down his life in the line of his duty. Spr Prakash Jadhav was given the nation's second highest peace-time gallantry award, “Kirti Chakra” for his exceptional display of bravery, camaraderie, devotion to duty and supreme sacrifice.

The Citation for  Kirti Chakra awarded to him reads :

At 0330 hours on 27 November 2018, a cordon and search operation was launched in a village of Jammu & Kashmir. Sapper Prakash Jadhav was leading the search party. Suddenly, terrorists opened indiscriminate fire on search party. Sensing danger to his buddy, he pushed him aside, exposed himself, under heavy firing by the terrorists, effectively retaliated back and eliminated one terrorist on the spot.  Meanwhile, second terrorist opened fire and threw a petrol bomb. He alerted his team to leave house. In this process, he sustained bullet injuries, however, undeterred from his grave injuries, he fearlessly brought down accurate fire and injured the terrorist. Due to the petrol bomb fire spread all over the house and Sapper Prakash Jadhav could not extricate himself and succumbed to his gunshot wounds and burn injuries.

Sapper Prakash Jadhav was also recommended for Gallantry award for an operation conducted on 25 October 2018 in which he neutralized a hardcore terrorist.