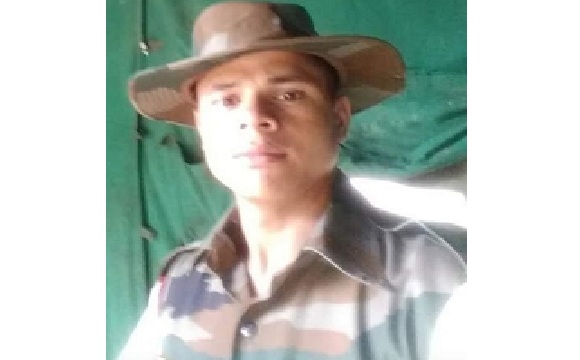 Rifleman Yogambar Singh hailed from Sankari village in Chamoli district in Uttarakhand. Son of Shri Virendra Singh Bhandari and Smt Janaki Devi, Rfn Yogambar Singh had two brothers Vasudev & Prashant and sister Ritu as his siblings.  He was inclined to join the Army since his younger days and eventually joined the Army in 2015 at the age of 21 years. He was recruited into 17 Garhwal Rifles battalion of the Garhwal Rifles Regiment, an infantry Regiment known for its brave soldiers with a rich history of various battle honours.

After serving for few years, he got married to Ms Kusuma Devi in the year 2018 and the couple had a son Akshat. Later Rfn Yogambar Singh was deputed to serve with 48 RR battalion, deployed in J&K for counter-insurgency operations.

During Oct 2021, Rfn Yogambar Singh‘s unit 48 RR was deployed in Poonch district of J&K. The unit troops were engaged in operations against the terrorists on a regular basis as the unit's area of responsibility (AOR) was active with militancy. The LOC located near to its AOR, remained highly active and volatile with ceasefire violations occurring very often and without any warning. The area was also prone to infiltration, which necessitated regular armed patrols to check any infiltration from across the border. Following inputs from the intelligence sources about the presence of some terrorists, the security forces including the troops of 48 RR launched a search operation in Nar Khas forest area in Mendhar sector of Poonch’ district. Rfn Yogambar Singh was part of the team that launched the search and destroy operation.

The assault team soon made contact with the terrorists, who fired at the troops on being challenged. A fierce gun battle followed thereafter with heavy exchange of fire. As he cordon around the terrorists was tightened, they started firing indiscriminately in a desperate attempt. During the heavy cross firing Rfn Yogambar Singh and Rfn Vikram Singh Negi received gun shots and got seriously injured. They later succumbed to their injuries and were martyred. Rfn Yogambar Singh was a gritty and valiant soldier who laid down his life at the age of 27 years in the line of his duty.