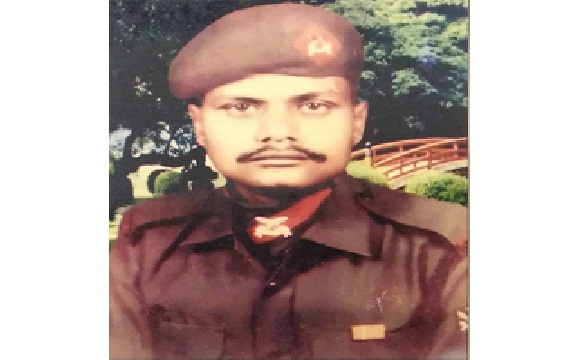 Rifleman Shyam Singh hailed from Bhujpura village in Kanshiram Nagar district of Uttar Pradesh and was born on 01 April 1969. Son of Shri Girvar Singh and Smt Ramshri Devi, he had one elder and one younger brother as his siblings. Rfn Shyam Singh joined the army in November of 1989 at the age of 20 years after completing his initial education.

He was recruited into 7 Assam Rif battalion of Assam Rifles, the oldest para-military force of India with its headquarters at Shillong. After serving for a few years, Rfn Shyam Singh got married to Ms Shobha Devi on 25 April 1993 and the couple had a daughter Vijay Laxmi. By the year 1998, he had put in over eight years of service and had served in many challenging operational areas.

During Jan 1998, Rfn Shyam Singh was serving with 7 Assam Rif battalion deployed in Manipur for counter-insurgency operations. The unit was deployed in Thoubal district of Manipur and was part of 'Operation Hifazat' being undertaken by the Army in Nagaland-Manipur-Arunachal Pradesh area. As the area of operation (AOR) of the unit was active with militancy, Rfn Shyam Singh and his comrades had to maintain a high level of alert at all times and had to be ready for operations at a short notice. As the militants often targeted road convoys of troops, it was a standard operating procedure to sanitize the designated route by (ROP)Road Opening Party. Rfn Shyam Singh was part of one such ROP on 28 Jan 1998.

On that day the ROP of  7 Assam Rif battalion besides Rfn Shyam Singh comprised of one JCO and 20 other ranks.  The insurgents in a pre-planned move fired on the road opening party piquet at the time of their choosing. Rfn Shyam Singh received gun shots and sustained grievous injury. Taking advantage of the situation, one insurgent approached the piquet and made an attempt to grab the personal weapon of Rfn Shyam Singh. However Rfn Shyam Singh despite being injured, grappled with him and managed to eliminate him in a rare show of courage and fighting spirit. Rfn Shyam Singh later succumbed to his injuries and was martyred. Rfn Shyam Singh  was a valiant and dedicated soldier, who laid down his life in the line of his duty. Rfn Shyam Singh was given the gallantry award, ''Shaurya Chakra'' for his commendable bravery, fighting spirit, and supreme sacrifice.