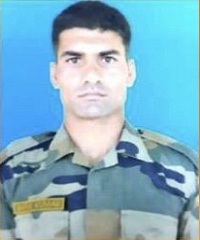 Rifleman Shive Kumar hailed from Karoor village of Kishtwar Tehsil in Doda District of Jammu & Kashmir. Son of Shri Somnath, Rfn Shive Kumar nursed the idea of joining the armed forces since his younger days. He was also passionate about bodybuilding and led a very disciplined life. He pursued his dream and joined the army in the year 2005. He was recruited into 15 JAK LI of the J&K light infantry regiment, an infantry regiment well known for its brave soldiers.

During his service career of about 13 years, he served in various operational areas with difficult terrain and challenging work conditions. After serving with his parent unit for a few years he was deputed to serve with 31 RR battalion deployed in J & K for carrying out counter-insurgency operations.

During 2018, Rfn Shive Kumar’s unit was deployed in the Bandipora area of J & K and was engaged in operations against the terrorists on a regular basis. The area under the responsibility of the unit had thick forest and was being used by the terrorists for infiltrating into Indian territory from across the border. On 30 Aug  2018, the security forces received the information from the intelligence sources about the presence of some militants who had infiltrated from across the LOC. Based on the credible information, a massive cordon and search operation was launched by 31 RR and 27 RR troops. The first contact with the militants was made on the next day morning on 31 Aug, who fired at the troops on being challenged. A fierce gun battle ensued thereafter in which three militants were eliminated.

However, during the heavy exchange of fire Rfn Shive Kumar got severely injured and was immediately shifted to the 92 Base Hospital at Srinagar. However, Rfn Shive Kumar succumbed to injuries and was martyred. He was a dedicated, valiant and committed soldier who laid down his life in the service of the nation. Rfn Shive Kumar was given the gallantry award, “Shaurya Chakra” for his dauntless courage, fighting spirit and supreme sacrifice.

Rfn Shive Kumar is survived by his parents,  wife,  two daughters and a son.

The citation for ‘Shaurya Chakra” awarded to him reads:

On 31 Aug 2018, Rifleman Shive Kumar was part of the seek and destroy mission in an area in Jammu & Kashmir.  At about 0718 hours, Rifleman Shive Kumar noticed movement of terrorists at very close range. He immediately sensed that his Team Commander who had not seen the terrorist is vulnerable to fire.  With utter disregard to personal safety and sensing danger to the life of his Team Commander, Shive Kumar charged towards the terrorist.  He came under heavy barrage of accurate fire from the terrorists and suffered multiple gun shot wounds due to which he dropped his weapon. Displaying raw courage and despite being injured he kept on charging towards the terrorist and pounced on him, overpowered him and killed him with his bare hands.  Still sensing the grave danger to which his own troops were exposed, he picked up the weapon of the terrorist and injured the second terrorist before succumbing to his injuries.

For this gallantry act of exceptional valour and exemplary raw courage, Rifleman Shive Kumar is recommended for the award of SHAURYA CHAKRA (POSTHUMOUS).