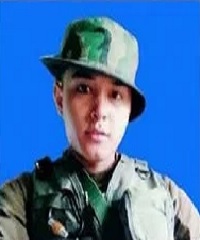 Rifleman Ram Babu Shahi hailed from Jagatpur village in Chitwan district of Nepal and was born in 1994. Rfn Ram Babu Shahi joined the Indian Army in 2013 at the age of 19 years and was recruited into 1 Gorkha Rifles Regiment, an infantry regiment known for its fearless soldiers. After serving for a couple of years with his parent unit , Rfn Shahi was deputed to serve with 32 RR battalion deployed in J & K for counter insurgency operations.

During 2018, Rifleman Ram Babu Shahi while serving with 32 RR was deployed in the Baramulla distirct of J&K. His battalion was engaged in anti insurgency operations against the terrorists on a regular basis and often faced very challenging situations. On 16th Aug 2018, the intelligence sources had provided information to the security forces about the presence of a large number of terrorists hiding in Kachhlu village of  Rafiabad area in Baramulla district. On assessing the situation, a decision was taken to launch a joint operation comprising elements of Army, CRPF and J & K Police. Rifleman Ram Babu Shahi was part of the Army contingent from 32 RR . On 17 Aug 2018, the joint team launched the operation as planned and reached the suspected area.

The joint team cordoned off the suspected area and began search operation. When the operation was underway, the terrorists felt cornered and attacked the troops form their hiding places. A gun battle ensued thereafter with heavy exchange of fire. Rfn Ram Babu Shahi got hit by bullets during the exchange of fire and got injured severely. He was given the first aid and was immediately rushed to the Army’s 92-Base Hospital at Srinagar. However, the brave soldier  succumbed to his injuries later and was martyred. Rfn Ram Babu Shahi was a valiant and dedicated soldier, who at the young age of 24 years, laid down his life in the service of the nation.

Rfn Ram Babu Shah  is survived by his parents, wife and a daughter.