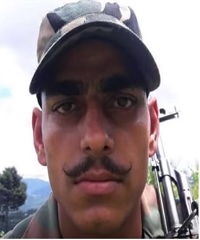 Rifleman Rajesh Poonia hailed from Bhagal village in Guhla Tehsil, in Kaithal district of Haryana. He was born to Sri Bhag Singh Poonia and Smt Krishna Devi and was the eldest among two sons. He joined the Army in 2015 and was enrolled into 6 Raj Rif unit of the famed Rajputana Rifles Regiment, an infantry regiment known for its gallant soldiers and various battle honours.

During 2018, Rifleman Rajesh Poonia’s unit was deployed in Kakar region of Ladakh along the LOC. On 18th August 2018, he was performing patrol duty at about 18000 feet in the area, dotted with dangerous slopes, gorges, and slippery terrain. To make the matter worse the weather often played the role of the enemy with temperature going down to sub-zero and visibility dropping to almost nil. Rifleman Rajesh Poonia also became the victim of the weather at that altitude when he slipped on the icy slopes due to poor weather conditions and fell into a gorge 300 m down. He got severely injured and later succumbed to his injuries. Rifleman Rajesh Poonia was a valiant and committed soldier who laid down his life in the line of his duty.

During his funeral at his ancestral village, amid the loud chants of ‘Rajesh Poonia Amar Rahe,’ the grief-stricken mother made a very brave statement saying: ” I am proud of my son’s martyrdom and I am ready to send even my second son to the army to serve the nation.” Rifleman Rajesh Poonia is survived by his father Sri Bhag Singh Poonia, mother Smt Krishna Devi and brother Rampal.