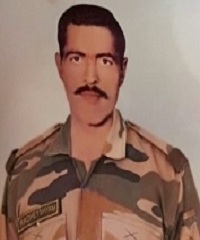 Rifleman Radhey Shyam, born on 15th July 1958, hailed from Nagla Arjun village in Mathura district of Uttar Pradesh. Son of Shri Ram Prasad and Smt Basanti Devi, Rifleman Radhey Shyam joined the Army on 21 May 1976 at the young age of 18 years. He was inducted into 5 Raj Rif of the famed Rajputana Rifles, an infantry regiment well known for its gallant soldiers and numerous battle exploits. Rfn Radhey Shyam got married to Ms Rambati Devi in 1980 and the couple had two children.

By 1987, Rfn Radhey Shyam had put in about 11 years of service and had gained experience in working in diverse operational environments with challenging terrain and conditions. During the IPKF operations, Rfn Radhey Shyam’s unit was sent to Sri Lanka as part of IPKF to undertake operations against the LTTE.

After the induction of Indian security forces in Aug 1987, as part of Indo-Sri Lankan accord, the militants were supposed to surrender but the dreaded LTTE backed out and unleashed war on Indian forces. Initially only 54 division of the Army was inducted but the escalation of the operations brought three more divisions 3, 4 and 57 into the conflict. By Oct 1987, Rfn Radhey Shyam ’s unit was operating deep inside Sri Lanka and was in thick of combat operations. As the battle for Jaffna progressed, the Indian Peace Keeping Force (IPKF) advance came under intense and vicious opposition from the LTTE Tigers. On October 15/16 the IPKF stopped its advance to stabilize the front. Palay, the major operations headquarters for the 54th Infantry Division, was also secured from Tiger attacks. At this time the IAF undertook a massive airlift to reinforce the IPKF with heavy equipment, including T-72 tanks. Now reinforced, the IPKF resumed the battle for Jaffna on 18 Oct.  On 18 Oct 1987, Rfn Radhey Shyam’s unit was tasked to link with Jaffna fort.

Rfn Radhey Shyam was part of the Charlie Company of his unit and was operating the LMG of no I section of the Company. However, during their advance from road Junction for linking up with the Jaffna Fort, the troops came under heavy militant fire from Manippe.  Rfn Radhey Shyam got hit by a burst of bullets and sustained serious injuries and was shifted to the nearest hospital. Later he succumbed to his injuries and was martyred. Rfn Radhey Shyam was a brave and committed soldier who laid down his life in the line of his duty.