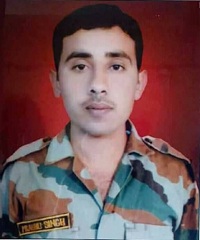 Rifleman Prabhu Singh hailed from Shergarh tehsil of Jodhpur in Rajasthan and was born on 23 Nov 1991. Son of Shri Chandra Singh, an Army veteran, Rfn Prabhu Singh was keen to join the Armed Forces, right from his younger days. He continued to nurse the dream of joining the Army and eventually followed into  his father’s footsteps to don the olive green uniform. Rfn Prabhu Singh was enrolled in 2011, into 13 Rajputana Rifles of the Rajputan Rifles Regiment, a Regiment well known for its fearless soldiers and innumerable battle exploits.

After serving for few years with his parent unit, Rfn Prabhu Singh  was deputed to serve with 57 Rashtriya Rifles, deployed in J & K for counter-insurgency operations. Rfn Prabhu Singh  later got married to Ms Om Kanwar in July 2013 and the couple had a daughter Palak. By Nov 2016, Rifleman Prabhu Singh had completed nearly six years of service and developed into a valiant and dedicated soldier.

During 2016, Rfn Prabhu Singh’s unit was deployed in Kupwara sector of J & K and was engaged in operations against the militants on a frequent basis. As the unit’s AOR(Area of Responsibility) was prone to infiltration by the militants, the unit troops had to maintain a high state of alert at all times. The unit launched frequent patrols to  monitor the gaps between the manned posts in order to check the infiltration. On 22 Nov 2016, Rfn Prabhu Singh was part of a patrol operating in Machhil sector of Kupwara district along the LOC. On that day Pakistani army’s Border Action Team (BAT) and Pakistan sponsored terrorists had made a sinister plan and were waiting in the hideout to ambush the Indian army’s patrol party.

As the patrol team approached near their hideout, they were fired upon in a sudden attack. As it was a pre-planned attack from vantage points, Rfn Prabhu Singh  and two other soldiers took direct hits and got seriously wounded. The enemy soldiers went a step further in their dastardly act and mutilated the body of Rfn Prabhu Singh  after beheading him. Rfn Prabhu Singh  was a gallant and committed soldier who had laid down his life in the line of his duty, before he could turn 25.