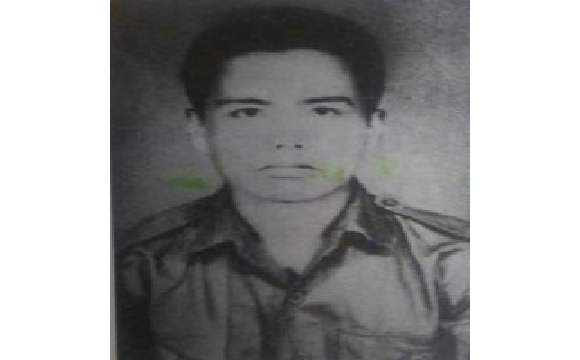 Rifleman Pati Ram Gurung hailed from Lamjung in Nepal and was born on 8th September 1948. Son of Shri Padam Bahadur Gurung, he joined the Indian Army in 1965 at the age of 17 years. He was enrolled into the 5/1 GR battalion of 1 Gorkha Rifles Regiment, an infantry Regiment, famous for its valiant soldiers and numerous battle exploits. By 1971, he had put in around 06 years of service and had served in various field areas.

During Nov 1971, Rifleman Pati Ram Gurung's unit was deployed in the eastern sector as various units had been moved to the operational locations when the war with Pakistan had become imminent. Though the 1971 war officially commenced on 03 Dec 1971 when Pak Air Force attacked our 11 Air Force bases, the border skirmishes and hostile actions by the enemy were happening much before that. On 30 Nov 1971, 5/1 GR came under attack by the enemy forces. Rifleman Gurung was functioning as a member of a medium machine gun detachment of the rifle company which bore the brunt of the attack.

His company faced attack by intense and accurate heavy machine gun fire from an enemy bunker. Realizing the gravity of the situation Rifleman Gurung sensed that the enemy MMG post had to be silenced at any cost to stop the causalities on our side. In a daring move, Rifleman Gurung immediately rushed forward and single-handed charged at the enemy machine gun post. However while doing so, he got mortally wounded, but undeterred continued the charge. Eventually he managed to silence the enemy machine gun before collapsing on the battle-field. He showed exemplary valour and leadership and made the supreme sacrifice. Rifleman Pati Ram Gurung was a fearless and committed soldier who laid down his life at the age of 23 years in the line of his duty.