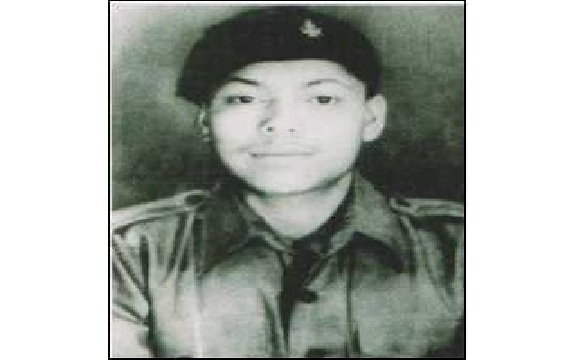 Place of birth : Chamoli, UP

On 05 Dec 1971, two Infantry platoons of 6 Ghar Rif supported by two troops of tanks, artillery and 81mm Mortar launched an attack on the enemy company at Nawapind (Sialkot sector). Number 4049455. Rfn Makar Singh Negi was No 1 of Light Machine Gun detachment, as part of the assaulting troops. On reaching the objective, he dashed and charged with his light machine gun with lightening speed into the enemy medium machine gun post with utter disregard to his personal safety. In doing so, he got wounded by a burst from the enemy medium machine guns. Undaunted by his serious wounds. Rfn Makar Singh Negi with his light machine gun succeeded in silencing the enemy medium machine gun. Which was accurately showering bullets on our assaulting troops apart from silencing medium machine gun post, he inflicted few more causalities on the enemy with his light machine gun untill finally collapsing and succumbing to his wounds. This brave action of his enabled the assaulting troops to charge through the objective and finally enabled the successful capture of the objective. For his act of conspicuous gallantry, boldness and high sense of devotion to duty in the presence of highly determined enemy during the action in the battle of Nawapind (Sialkot sector). He was awarded Vir Chakra (posthumous)