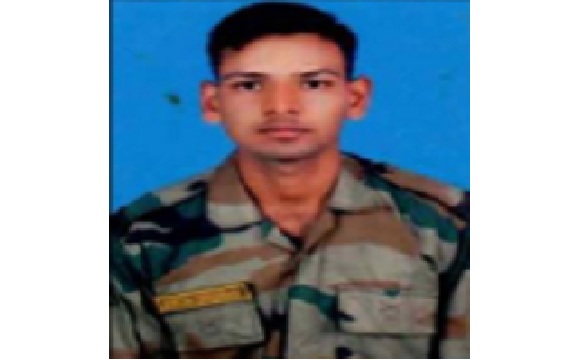 Rifleman Lokendra Singh hailed from Bhadrauli village of Bah Tehsil in Agra district of Uttar Pradesh. Son of Shri Maharaj Singh Tomar and Smt Kambodi Devi, Rfn Lokendra Singh developed a keen interest in Armed Forces since his younger days. Following his inclination, he got selected to join the army and eventually donned the uniform in the year 2011 at the age of 19 years. He was recruited into the 18 Raj Rif battalion of the Rajputana Rifles Regiment, an infantry Regiment known for its brave soldiers and numerous battle honours.

After serving for nearly 4 years, he got married to Ms Lalita in the year 2015 and the couple had two children  Abhi and Arpita. By 2022, Rfn Lokendra Singh had put in around eleven years of service and had evolved into a dedicated and disciplined soldier.

During 2022, Rfn Lokendra Singh’s unit was deployed in the Baramulla district of J&K. The unit troops were manning the forward posts in Baramulla district along the LOC. Besides manning the posts, the unit soldiers had to undertake armed patrols regularly to monitor the area under its AOR ( Area of Responsibility). The posts were located in high-altitude areas with inhospitable weather conditions and rugged terrain. Many posts, as well as the patrol routes of the unit, were prone to snow blizzards, avalanches, and unpredictable landslides, especially during winter seasons. Besides the unprovoked firing from the enemy, the soldiers often faced hostile weather conditions. On 10th Jun 2022 Rfn Lokendra Singh was manning a forward part along the LOC in Gulmarg sector of Baramulla district.

It was a very bad-weather day and the sky was covered with low and charged clouds. Due to the large build-up of cumulonimbus clouds, lightning and thunder was taking place at frequent interval. Rfn Lokendra Singh along with his comrades was manning a surveillance post to monitor enemy activity in that sector.  However at around 10:15 pm the post was struck by lighting owing to inclement weather. As a result Rfn Lokendra Singh sustained grievous injuries and was administered first aid at the post. He was then rushed to nearby medical facility but soon he succumbed to his injuries. Rfn Lokendra Singh was a valiant and committed soldier who laid down his life in the line of his duty.