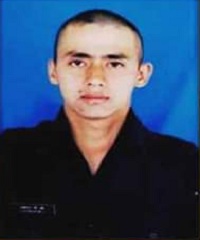 Rifleman Laxman BC hailed from Beechtol village of Surkhet district in Nepal. Son of a police inspector in Nepal police Shri Nain Bahadur BC and Smt Kokila Devi, Rfn Laxman had one elder brother Shri Lokendra BC who was serving in the Nepalese army. Rfn Laxman also wanted to serve in the armed forces since his younger days and eventually got selected to join the Indian army after completing his school education. He joined the Indian army in the year-2018 at the age of 20-years. He was recruited into 3/9 GR of the 9 Gorkha Rifles Regiment, an infantry regiment with a long history of valour and numerous battle honours.

After completing his initial training at 39 Gorkha Training Centre in Varanasi, Rfn Laxman got posted to the trouble-torn Kashmir valley as his first assignment. After serving for a year, Rfn Laxman got married to Ms. Pansari Devi in Jan 2019 and the couple had a daughter Asmita who was born in Dec-2019.

During Jan 2020, Rfn Laxman’s unit was deployed in the Kupwara district of J&K. The unit troops were manning the forward posts in Tangdhar Sector of Kupwara district along the LOC. Besides manning the forward posts, the unit troops were also engaged in counter-infiltration operations. The forward posts of the unit were located in high altitude areas with extreme weather conditions. The location of many posts was also prone to snow blizzards and unpredictable avalanches. During the 2nd week of Jan 2020, there was heavy snowfall in North-Kashmir including Tangdhar Sector with the area covered under few feet of snow. On 13th & 14th Jan 2020 four major avalanches struck Kupwara district trapping many soldiers. One such horrific avalanche hit an army post of 3/9 GR in Tangdhar Sector on 14th Jan 2020. Rfn Laxman along with five other soldiers were manning Ajit post of 3/9 GR, which was struck by the avalanche.

The suddenness and severity of the avalanche took the soldiers off guard and prevented them from taking any preventive action. The soldiers got trapped and buried under tons of snow. The army launched a team with specialized equipment to rescue the soldiers in the quickest possible time. The rescue team managed to extricate five soldiers, however, Rfn Laxman could not be saved owing to his prolonged exposure to extreme cold. Rfn Laxman was a courageous soldier who laid down his life at the age of 22-years in the line of his duty.