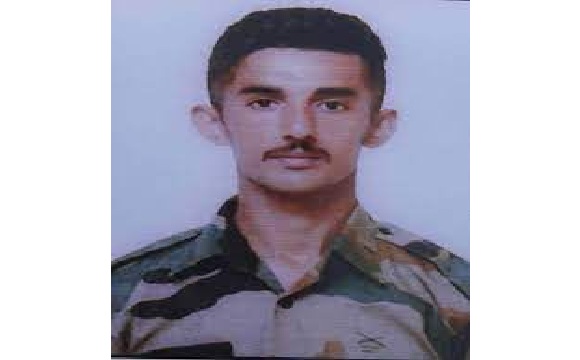 Rifleman Kulbhushan Manta hailed from Gonth village of Majhauli Panchayat in Kupvi area of Shimla district in Himachal Pradesh. Son of Shri Pratap and Smt Durma Devi, he was born in the year 1996 and had three sisters Rekha, Kiran and Rajni as his siblings. Like many youngsters in Himachal Pradesh, he too wanted to serve in the Army since hid childhood.  Eventually ,after completing his school education, he joined the Indian army in 2014 at the age of 18 years. He was recruited into the 18 JAK Rif battalion of the Jammu and Kashmir Rifles Regiment, an infantry Regiment known for its brave soldiers and rich history of various battle honours.

After serving for a few years, he got married to Ms Neetu and the couple was blessed with a son. By 2022, he had completed around eight years of service and developed into a tough and devoted soldier. After serving with his parent unit Rfn Kulbhushan Manta was later deputed to serve with the 52 RR battalion, deployed in J&K for counter-insurgency operations.

During Oct 2022, Rfn Kulbhushan Manta’s unit 52 RR battalion was deployed in the Baramulla district of J&K. The LOC was highly active and volatile where cease-fire violations occurred very often and without any warning. It was also used by the terrorists for infiltration with the connivance of Pakistani security forces. The infiltration by the terrorists was invariably attempted under the cover of artillery fire or with the help of Border Action Team(BAT). Based on the information from the intelligence sources, about the presence of 4-5 hardcore terrorists in the Washran village of Baramulla district in J&K, the security forces launched a search and cordon operation on 26th Oct.  It was a joint operation comprising soldiers of Indian Army from 52 RR and J&K Police personnel. Rfn Kulbhushan Manta was part of the team that was assigned the task of conducting this operation.

The operation was launched in the wee hours of  26th Oct 2022 and continued for several hours. As the search party was moving towards the forested area of Washran village in Baramulla district, the terrorists opened fire at the troops. As a result, a fierce gun battle erupted with the terrorists, who felt threatened with the advancing troops. During the heavy exchange of fire, Rfn Kulbhushan Manta received gun shots and sustained grievous injuries. He was immediately taken to GMC Baramulla by road for medical treatment and subsequently was airlifted to 92 Base Hospital, Srinagar.  However he succumbed to his injuries at around 1230 hrs on 27 Oct and was martyred. Rfn Kulbhushan Manta was a valiant and committed soldier who laid down his life at the age of 26 years in the line of his duty.
Rfn Kulbhushan Manta is survived by his father Shri Pratap Manta, mother Smt Durma Devi, wife Smt Neetu, son and three  sisters, Rekha, Kiran & Rajni.