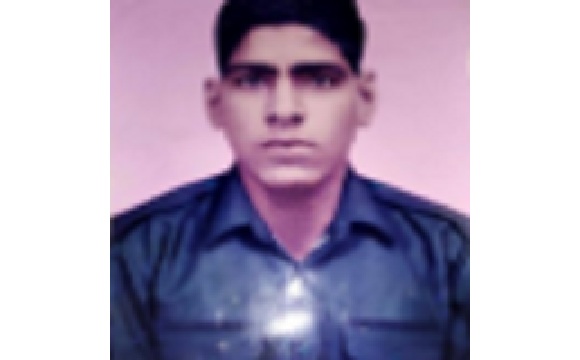 Rifleman Kalu Ram Olkha hailed from Inderpura village of Jhunjhunu district in Rajasthan and was born on 8 Oct 1945 . Son of Shri Hardeva Ram and Smt Narayani Devi, Rfn Kalu Ram had two sisters and four brothers as his siblings. Right from his younger days, he always wished to don the Army uniform. Following his dream, he joined the army after completing his school education in the year 1963 on 14th Oct at the age of 18 years. He was recruited into the 4 Raj Rif battalion of the Rajputana Rifles Regiment, an infantry Regiment known for its brave soldiers and numerous battle honours.

The unit traced its history to Baji Rao Peshwa’s Poonah Auxiliary Infantry, which was raised in 1812 at erstwhile Poonah and comprised men who were recruited from “the other provinces of Hindustan. It was converted to First Battalion Twelfth Regiment, a unit of the East India Company, in May 1820, and had been in continuous existence since then.  It took part in WWII and after 4 years of relentless action in the Second World War, it became the first unit to return to India from Italy.  After Independence, its ‘A’ Company [from pre-Partition 3/1 Punjab unit] operated under the 50 Parachute Brigade, earning a Vir Chakra and three mentions in despatches.  It also took part in "Operation Polo" in 1948 and was part of the UN Mission in the Congo in 1962.  Rfn Kalu Ram was happy and proud to be a part of 4 Raj Rif battalion which had such a glorious history.  In the very early part of his service career, he got an opportunity to get involved in active operations, as his unit got deployed on the western border when the war clouds gathered on the horizon in the year 1965.

During Sep 1965, Rfn Kalu Ram's unit 4 Raj Rif was deployed in Jammu (RS Pura)-Sialkot border. Pakistan launched ‘Operation Gibraltar’ in Aug 1965, wherein thousands of infiltrators were sent across the border to carry out sabotage and subversion. Following the failure of Op Gibraltar, Pakistan invaded Chhamb district on 01 Sep 1965 triggering an aggressive response from the Indian forces. By 13 Sep 1965, 4 Raj Rif had been part of many successful operations and was established at Alhar railway station in Sialkot. The Alhar station situated at Sialkot in Lahore was a key stretch of the Punjab province of Pakistan and was militarily significant too.  As the Alhar station had a strategic importance for Pakistan, its forces launched multiple attacks to dislodge the Indian forces.  Rfn Kalu Ram was part of 4 Raj Rif troops who were assigned the task of defending  Alhar railway station.

The enemy launched a series of counter attacks along with armour. Though Rfn Kalu Ram  and his troops could not get the support of Indian armour, they fought gallantly and managed to repulse the aggressive enemy attacks. However during the heavy exchange of fire, Rfn Kalu Ram received gunshots and was severely injured.  Despite being injured, Rfn Kalu Ram crawled forward and put up a brave fight till he collapsed on the battle field. He soon succumbed to his injuries and was martyred. Rfn Kalu Ram  was a valiant and committed soldier, who laid down his life in the line of his duty before he could event turn 20, following the highest traditions of the Indian Army.