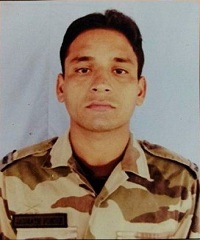 Rifleman Jayadrath Singh was born on 28th April 1989 and hailed from Bhagwanpur village of Saharanpur district in Uttar Pradesh. Son of Shri Jasvir Singh. Rfn Jayadrath Singh was fondly called  “Bholu” in his village.  Rfn Jayadrath Singh had joined the army in 2008 at the age of 18 years. He was recruited into 2 Raj Rif of the Rajputana Rifles Regiment , an infantry Regiment known for its fearless soldiers and numerous battle honours.

During July 2017, Rfn Jayadrath Singh’s unit was deployed in Sunderbani sector of Rajouri district in J &K. On 21st July around at 1805 hours, when Rfn Jayadrath Singh was manning a forward post, Pakistan Army initiated unprovoked firing on Indian Army posts in Sunderbani sector. Pakistani firing and shelling covered Balakote, Panjgrian, Naika and Manjakote areas along the LOC in Rajouri district. The firing from Pakistan was quite intense and continued for a long time.

The Indian Army retaliated the firing in a befitting manner and the exchange of fire continued for several hours. During this exchange of fire Rfn Jayadrath Singh was critically injured and was taken to the nearby hospital after administering the first aid. However, he later succumbed to his injuries and attained martyrdom. Rfn Jayadrath Singh was a brave and committed soldier who laid down his life in safeguarding the borders of our nation.

Rifleman Jayadrath Singh is survived by his father Jasvir Singh, wife Mamta Devi and brother Ajay Kumar, who also serves in the Army.