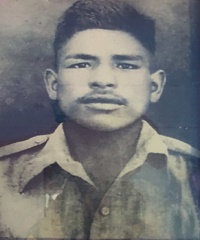 When the troops of Garhwal Rifles were given the command to return back from Battle of Nuranang, a 21-year-old Sepoy from the unit refused to leave the battleground. In a display of rare courage, he held the post and gave a tough time to the Chinese soldiers with his dare-devilry. Rfn Jaswant Singh was martyred in the battle, but fought courageously for three days, and almost to the last man.

It was the last phase of the war in November 1962, and the Army units facing the enemy were struggling with a shortage of manpower and ammunition. On 17 Nov Rfn Jaswant Singh’s battalion was subjected to repeated Chinese assaults. A Chinese medium machine gun (MMG) located at a vantage point close to the A company lines was proving to be a dangerous menace. Rfn Jaswant, Lance Naik Trilok Singh Negi, and RFN Gopal Singh Gusain decided to neutralize the threat and went after the Chinese MMG.

Rfn Jaswant Singh along with his comrades using their best field craft skills crawled towards the bunker housing the MMG. After approaching within 12 meters from the MMG, Rfn Jaswant threw grenades at the bunker, killing a number of Chinese soldiers and capturing the MMG. Rfn Jaswant Singh took the MMG and began crawling back towards the Indian lines but was fatally hit by Chinese automatic fire when nearing safety.

The exceptional courage and initiative shown by Rifleman J.S. Rawat in the face of intense enemy fire were in the best traditions of our Army.

The post where Rfn Jaswant Singh fought his last battle is now named as Jaswant Garh. Among the local populace Rifleman, Jaswant is known as Baba Jaswant Singh Rawat. His personal belongings have been kept safe even today at Jaswant Garh. Five soldiers are specially assigned to take care of Rfn Jaswant Singh’s room. Though the room is empty, soldiers place the morning bed tea at 4.30 AM, prepare breakfast at 9 am and dinner at 7 pm. According to army sources, it is discovered that bedsheets of his room are found crumpled and his clothes lay scattered in the room.

The people of the army in the local units still believe that Rifleman Jashwant Singh Rawat still guards the post as a spirit and has been guiding Indian soldiers in dreams. He is the only soldier who has been promoted to the rank of Major general after his death. His salary is credited every month and most strange of all, he is even granted official leave on various occasions.

The Housing project of Jaswant Nagar in Dehra Dun has been named after rifleman Jaswant Singh Rawat in his honour.