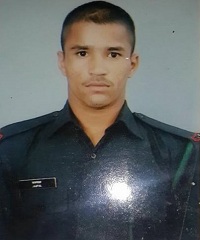 Rifleman Jaipal Singh hailed from Nathan village of Bhekhil Panchayat in Kullu District of Himachal Pradesh. He completed his primary and secondary education at his native place in Kullu. In 2013, just after finishing his studies he joined the armed forces. After completing his initial training he was inducted into 5th battalion of Jammu & Kashmir Rifles, an infantry regiment  known for its intrepid soldiers and various battle honours.

During 2016, Rfn Jaipal was posted to Ramgarh of Samba District in Jammu & Kashmir. On 11th March 2016, his unit was given the duty on Ditch Cum Bunds (DCB) in the Zero Line of Indo Pak border near the Abtaal Road. It was a very bad-weather day and the sky was covered with low and charged clouds. Due to the large build up of cumulonimbus clouds  lightning and thunder was taking place at frequent interval. Rfn Jaipal was performing his duty with his colleagues at the check post of Abtaal Road. Abruptly the lighting with thunderstorm hit that place. Rfn Jaipal along with the other two soldiers was grievously wounded in the lightning strike. They were immediately shifted to the hospital. But before they could reach the hospital Rfn Jaipal succumbed to his injuries. Rfn Jaipal Singh’s life was snatched while he was out protecting the motherland.