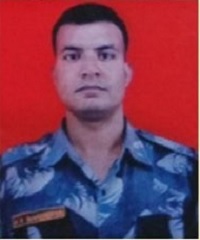 Rifleman Alom Hussain  was a member of  40th Assam Rifles.

During 2018 Rifleman Alom Hussain’s unit was deployed in the area which is  infested with insurgents engaged in anti national activities. On Jul 17 2018,  a gunfight took place between Assam Rifles personnel & suspected National Socialist Council of Nagaland (NSCN-K) terrorists. The rebels attacked the Assam Rifles personnel with grenades and guns.

The incident took place at around 3 pm near Aboi which is 35 km from the district headquarters, when Rifleman Alom Hussain along with his comrades was on his way to fetch river water between Aboi & Mohung. The insurgents in a pre-planned move attacked Assam Rifles personnels using automatic weapons and grenades and killed 4  jawans on the spot.  Rifleman Alom Hussain fought valiantly but got injured in the attack very badly. He was admitted in the hospital for his abdomen injury at Jorhat.  However, he could not survive and succumbed to his injuries later.

Rifleman Alom Hussain laid down his life in the service of nation.