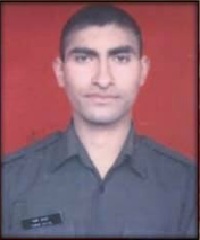 During Nov 2018, Rifleman Varun Katal’s unit,  8 JAK LI battalion was deployed in the Sunderbani sector near LOC. This sector near the LOC is very restive and volatile as the enemy forces often resort to unprovoked firing from across the border. On 10th Nov 2018, Rifleman Varun Katal was manning one of the forward posts in Sunderbani Sector. At around 9:45 AM on 10 Nov, unprovoked ceasefire violation was initiated by the Pakistani forces in Khour area of Sunderbani sector.

During the firing Rifleman Varun Katal got injured critically. Indian army retaliated strongly and effectively resulting in cross border firing for many hours from both sides. However Rfn Varun Katal later succumbed to his injuries and was martyred. on 10th Nov  2018. Rfn Varun Katal was a brave and dedicated soldier who at the young age of 21 years made the supreme sacrifice in the service of the nation.