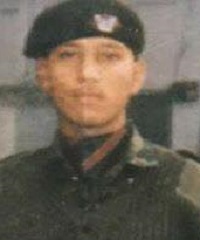 Rfn Sunil Jang Mahat hailed from Darjeeling in West Bengal and was born on 13 November 1978. Son of Smt Beena Mahat and an Army veteran Subedar Nar Narayan Jang Mahat, Rfn Sunil had two younger sisters, Sunita and Srijana. Right form his childhood, Rfn Sunil was fascinated with the Army life and was inclined to join the Armed Forces like his father and grand father. He grew up in a military family, wherein his grandfather, Major Nakul Jang Mahat, (A 1962 Indo-China war veteran) and father, Subedar Nar Narayan Jang, (A 1971 Indo-Pak war veteran) served in the Army and took part in the various wars and operations. His interest in the Army grew along with his age and consequently he joined the Army after completing his school education.

He was recruited into 1/11 GR battalion of 11 Gorkha Rifles Regiment, an infantry Regiment well known for its intrepid soldiers and numerous battle exploits. Rfn Sunil Jang had keen interest in sports during his student days, which continued during his military training period too. After completing his training, he got posted to the unit that was deployed in Palampur in Himachal Pradesh. During May 1999, as Rfn Sunil Jang’s unit was preparing to move form its field location in Siachen to a peace area in Pune, the situation at the LOC was hotting up  with large scale intrusion having been detected in various sectors. As a result, 1/11 GR was inducted into the Batalik sector on 09 May 1999.

Rfn Sunil Jang along with his unit got deployed in Batalik sector on 09 May 1999 and the unit was placed under the command of 70 Infantry Brigade. The area around Batalik was very rugged and had steep ridges offering no place to create a camp. The reports of the patrols confirmed that the enemy had occupied several mountain features and heights around Jubar and Kukarthang ridge-lines. As a result the Army made an operational plan that envisaged preventing the enemy from coming further and occupying more peaks. Thus it was important to capture the crucial features on the ridge-lines. Under this plan, 1/11 GR battalion was tasked to capture Point 4821 on Kukarthang ridge.

On the morning of 10th May 1999, a platoon of “D” Company of 1/11 GR linked up with the patrol of 3 Punjab which was wedged on the spur of Kukarthang ridge. The Patrol of 3 Punjab was in a precarious situation wherein the enemy was overlooking them from the forward spur of Kukarthang Top and there was an imminent danger of the enemy overrunning the greatly out-numbered patrol. Rfn Sunil Jang was part of the platoon of 1/11 GR that was launched from Yaldor on the afternoon of 9th May 1999. Rfn Sunil Jang and his comrades braving the hostile enemy fire, eventually merged up with the patrol of 3 Punjab at Kukarthang spur in the early hours on 10th May 1999.

Rfn Sunil Jang was functioning as the Signal operator of the platoon under the command of Lt RS Rawat. By 13th May, the platoon had thrown out the enemy from over one kilometre of the ridge-line, inch by inch. However the logistic column had been unable to reach owing to enemy artillery fire on the 11 th and 12 th of May. It had been 5 days since the platoon started the operation and by now the platoon was low on ammunition, batteries, and food. Finally Lt Samiran Roy with ‘B’ Company platoon reached to reinforce the D Platoon on 13th morning. On 15 May another attack was launched by 1/11 GR towards the objective using the available boulders to their tactical advantage. During the attack, Rfn Sunil Jang was engaging the enemy soldiers with with Lt Roy on his right side. He was engaged in the dual task of proving the radio cover as well as firing at the enemy. However during the heavy exchange of fire, Rfn Sunil Jang got hit by a bullet and fell down. He later succumbed to his injuries and was martyred. Rfn Sunil Jang was a valiant and gritty soldier who laid down his life at the age of 20 years in the line of his duty.