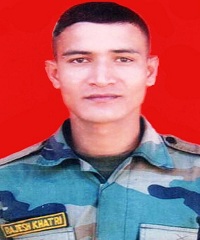 During Sep 2017, Sep Khatri ‘s unit 5/9 GR was deployed in Kupwara district of J & K along the LoC. The AOR (Area of Responsibility) of the unit fell in the part of LoC that was very volatile with frequent cross border violations. The area was prone to infiltration by the militants and the Pakistani forces often resorted to cross border firing to help the infiltration attempts. 5/9 GR battalion had to launch regular armed patrols to check infiltration attempts. Sep Khatri was a part of one such patrol on 20 Sep 2017 in Keran sector of Kupwara district.

Around 9.30 am on that day Pakistani troops commenced heavy shelling of the area and also targeted 5/9 GR patrol team. Indian forces also launched retaliatory attacks by using artillery fire and the exchange of fire continued for several hours. During this cross border exchange of fire, four Indian army soldiers including Sep Rajesh Khatri got severely injured. Sep Rajesh Khatri was immediately airlifted for medical treatment to 92-Base Hospital at Badami Bagh Cantonment at Srinagar. However, Sep Rajesh Khatri later succumbed to his injuries and was martyred.

Sepoy Rajesh Khatri was a valiant soldier who laid down his life at the age of 27 years in the service of the nation. He is survived by his wife Smt Deepa Khatri.