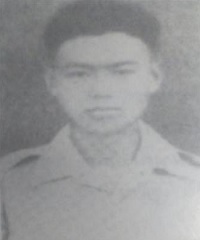 In December 1971, India had to go to war with Pakistan as the genocide perpetrated by the Pakistani army in their erstwhile eastern part of the country had posted an unprecedented influx of millions of refugees. India had to fight the war on it’s eastern as well as western and northern fronts which culminated in the liberation of a new country Bangladesh. During Dec 1971, Rfn Prem Bahadur Thapa’s unit 5/3 GR was deployed in the western sector.

As part of the ongoing operations the unit planned an attack on the enemy positions on 11 Dec 1971. The enemy feature was dominated by MMGs and LMGs and and was heavily fortified. As the attack commenced and the troops were crossing the start line, a medium machine gun post suddenly opened up from a flank and held up the attack. Rfn Prem Bahadur Thapa quickly assessed the situation and realized that the MMG needed to be neutralized at any cost to facilitate the advance of own troops. In a rare display of courage and total disregard to his own safety, Rfn Prem Bahadur Thapa decided to silence the MMG.

He immediately swung into action and started crawling towards the MMG post. While crawling towards the machine gun post, he was hit by a burst of fire and started bleeding profusely. Unmindful of his wounds and safety, he continued to crawl and threw a grenade in the trench. The grenade destroyed the post and the MMG which was impeding the advance of our troops was finally silenced. However, Rfn Prem Bahadur Thapa got grievously wounded and later succumbed to his injuries. He was a valiant and dedicated soldier who laid down his life in the service of the nation.

The citation for Vir Chakra awarded to him reads :
Rifleman Prem Bahadur Thapa was serving with a company of 3rd Gorkha Rifles during its attack on an enemy post in the Western Sector. After crossing the start line, a medium machine gun post suddenly opened up from a flank and held up the attack. In complete disregard for his safety, Rifleman Thapa volunteered to silence the weapon. While crawling towards the machine gun post, he was hit by a burst of fire and started bleeding profusely. Unmindful of his wounds and safety, he continued to crawl and threw a grenade in the trench. He silenced the machine gun but succumbed to his injuries.
In this action, Rifleman Prem Bahadur Thapa displayed gallantry, determination, and devotion to duty of a high order.