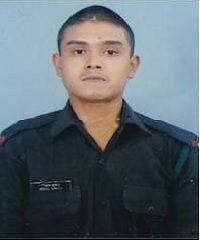 Rifleman Nehal Gurung hailed from  khagrohre village in Basholi tehsil of Kathua district in Jammu & Kashmir. The only son to his parents, Rfn Nehal Gurung belonged to a military family wherein his father, grand father and uncle too served in the Army. His grand-father Subedar Anantbir  Gurung had retired in 1983 whereas father Ravinder Gurung  had served in 2 JAK RIF and retired in 2004. Rfn Nehal Gurung had joined the Army in 2014 at the age of 18 years and was recruited into 5/9 GR unit of the famed 9 Gorkha Rifles Regiment, known for its valiant soldiers and numerous battle exploits.

During 2018, Rifleman Nehal Gurung’s unit was deployed in Keran sector in Kupwara district of J & K along the LOC. India shares around 3000 Km border with Pakistan in which around 740 km of LOC falls in Jammu & Kashmir. The LOC is highly active and volatile where cease fire violations occur very often in this area. Besides cease fire violations, the LOC in Kupwara district is also used by the militants for infiltration into Indian territory. The Army deploys armed patrols on a regular basis to check infiltration and Rfn Nehal Gurung was part of one such patrol on 25th August 2018, in Keran sector of Kupwara district.