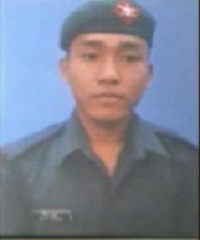 Rfn Jiwan Gurung hailed from Bagdogra in Darjeeling district of West Bengal. Born on  11th April 1994, Rfn Jiwan Gurung was the youngest son of Sri Kiran Gurung and Smt Poonam Gurung hailing from Singritam village in Lower Lamahatta Gram Panchayat in Darjeeling district. Rfn Gurung joined the Army at the age of 20 years in 2014. He was recruited into 2/1 GR of 1 Gorkha Rifles Regiment, a Regiment known for its fearless soldiers and numerous battle exploits. By 2019, he had completed four years of service and had taken part in various field operations. Besides being a soldier, Rfn Gurung had an inclination towards social service too and everyone in his hometown liked him very much.

During 2019, Rfn Jiwan Gurung’s unit was deployed in Rajouri district of J & K and was manning the forward posts in the Nowshera sector along the LOC. The Nowshera sector often saw ceasefire violations and infiltration attempts by the militants from across the border. The infiltration bids invariably were accompanied with artillery shelling and increased activity by the BAT(Border Action Team) of Pakistani forces. In another such attempt by the BAT, an IED (Improvised Explosive Device) was planted in the foot track along the LOC to target soldiers patrolling the Lam area in Nowshera sector. On 11 Jan 2019, one Reconnaissance and Surveillance team was tasked by 2/1 GR to carry out the recce of the area under its  AOR (Area of Responsibility). Rfn Jiwan Gurung was part of the team that was given this task.

Rfn Jiwan Gurung and his comrades set off as planned in the morning of 11 Jan 2019.  However as the the recce was underway, the team came under attack by an IED blast. The blast had a devastating effect and as a result Rfn Jiwan Gurung along with one Junior Commissioned Officer and another soldier got severly injured. The injured soldiers were immediately shifted to the nearby medical facility for treatment. In the meantime Rfn Jiwan Gurung’s Company Commander Maj Shashidharan Nair informed the CO of the unit, Col Lalit Jain, who then set off for the blast site. At the same time Maj Shashidharan too proceeded for the blast site along with his QRT (Quick Reaction Team). However Rfn Jiwan Gurung later succumbed to his injuries and was martyred. Rfn Jiwan Gurung was a brave and dedicated soldier who at the young age of 24 years made the supreme sacrifice in the service of the nation.