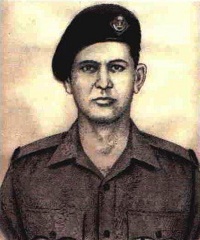 Rifleman Dhonkal Singh hailed form Sekhala Junavas village in Jodhpur district of Rajasthan. Son of Sri Simrath Singh and Smt Mot Kaur, Rfn Dhonkal Singh was born on 01 Dec 1923. He joined the Army in the year of 1944 at the age of 21 years and was recruited into 6 Raj Rif of the Rajputana Rifles, a regiment known for its gallant soldiers and numerous battle honours.

Pakistan was in a state of war with India since October 1947 and the enemy activity had increased during Apr 1948 in Uri Sector of J & K. During that time Rfn Dhonkal Singh’s unit was deployed in that sector which was being defended by two Indian battalions. On 18th April, the enemy attacked two pickets held by 6 Raj Rifles but was beaten back with heavy causalities on their side. On 29th April, the troops of 6 Raj Rif that included Rfn Dhonkal Singh were tasked to capture the Nalwa picket , also called ” Uri Ka Morcha” for its strategic Importance.

At 2000 hours of next day 30 April,  Rifleman Dhonkal Singh was guiding his platoon to the assigned objective as the leading scout. The path to reach the objective, Point 8370 South of Uri, was along a narrow ridge covered with pinewood. The enemy had noticed the movement of the platoon and was waiting for them to come within the firing range. As it came within 30 yards of an enemy ‘sangar’, the enemy opened fire with LMG. Rfn Dhonkal Singh, bore the brunt of the fire and was wounded in the left shoulder. Though faced by a surprise attack, Rfn Dhonkal Singh immediately swung into crawling position to avoid enemy fire and assess the situation.

Rfn Dhonkal Singh soon realized that the enemy LMG somehow had to silenced to save his comrades and move forward towards the objective. He then crawled forward to the flank of the enemy and after reaching within a few yards of the post destroyed it with a grenade, killing three enemy soldiers. The enemy was taken aback by this dare devil action and withdrew. However during the operation, Rfn Dhonkal Singh got hit by a grenade in his chest and face. In spite of his severe wounds Rfn Dhonkal Singh went forward and hurled the second grenade at the fleeing enemy, killing two more, including one commander. As his section reached the objective, Rfn Dhonkal Singh, severely wounded and drenched in blood, succumbed to his injuries and was martyred. Rfn Dhonkal Singh was a valiant and committed soldier who laid down his life in the service of the nation.

The Citation for the Maha Vir Chakra awarded to him reads:-

On 30 April 1948, in order to reach the objective Point 8370 South of Uri, Rifleman Dhonkal Singh’s platoon had to make its way along a narrow ridge covered with pinewood. As it came within 30 yards of an enemy ‘sangar’, the enemy opened fire with LMG. Rifleman Dhonkal Singh, the leading Scout, was wounded in the left shoulder. He crawled forward to the flank of the enemy and when within a few yards of the post he destroyed it with a grenade killing three enemy soldiers. The rest of the enemy withdrew. While charging the enemy he was badly hit by a grenade in his chest and face. In spite of his severe wounds he went forward and hurled the second grenade at the fleeing enemy, killing two more, including one commander. As his section reached the objective, Rifleman Dhonkal Singh, suffering from many wounds and drenched in blood, fell unconscious and died.

By his act of outstanding bravery and determination his company captured its objective without any other loss of life.