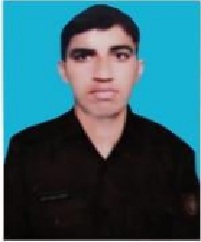 Rfn Anil Kumar Jaswal hailed from Saroh village in Bangana town of Una district in Himachal Pradesh. Son of an army veteran Ashok Kumar, Rfn Anil Kumar followed into the footsteps of his father and joined the army in 2013. He was recruited into 13 J&K Rif of the Jammu & Kashmir Rifles Regiment, a regiment well known for its gallant soldiers.

Rfn Anil Kumar got married to Shweta in 2017 and the couple had a son.

During 2019, Rfn Anil Kumar Jaswal’s unit 13 J&K Rif was deployed in Anantnag district in J&K, for counterinsurgency operations. As the area of responsibility (AOR) of the unit was insurgency prone area, the troops had to maintain a very high level of alert at all times. On 18th Jun 2019, the security forces had received information from the intelligence sources about the presence of some hardcore militants in Bijbehara area falling in the AOR of the unit. The unit decided to launch an operation to nab the militants at the earliest. Rfn Anil Kumar was part of the team that was assigned the task of launching this operation.

The assault team reached the suspected area in Bijbehara and launched search and cordon operation. As the search operation was underway, the militants got panicky and started firing indiscriminately at the troops. This action triggered the gun battle with heavy firing from both sides. Rfn Anil Kumar Jaswal and his comrades managed to eliminate two militants in the operation. But Rfn Anil Kumar too received gunshots and was seriously injured. He was immediately shifted to the Military medical facility for treatment. However, Rfn Anil Kumar later succumbed to his injuries and was martyred.

Rfn Anil Kumar was the dedicated and brave soldier who displayed courage and devotion to duty of a very high order during the operation. He laid down his life in the line of his duty following the highest traditions of the Indian Army. He is survived by his wife Shweta and a son.