Paratrooper Mukut Bihari Meena hailed from Ladania village of Jhalawar district in Rajasthan. Son of Shri Jagannath Meena and Smt Ghisibai, Ptr Mukut Bihari Meena was born on 25 Oct 1993 and joined Indian army in 2011 at the age of 18 years. He was recruited into 3 Para battalion of the Parachute Regiment, an infantry Regiment well known for its brave soldiers and various daredevil operations.

After serving for sometime, he got married to Ms Anjana Devi and the couple had a daughter Aaru in the year 2018. After serving for a couple of years with his parent unit, Ptr Mukut Bihari Meena was deputed to serve with 8 Rashtriya Rifles battalion deployed in the Kashmir valley for counter insurgency operations.

During 2018, Ptr Mukut Bihari Meena’s unit 8 RR was deployed in Kupwara district of J&K. As a number of militants were active the unit’s Area of Operation(AOR), the troops had to be on guard at all times and were engaged in operations against the militants on a regular basis. Also as the area was close to the Line of Control and provided forest cover, it was prone to infiltration by the militants from across the border. On 11 July 2018, the security forces received the information from the intelligence sources about the presence of some militants who had infiltrated from across the LOC. Based on the credible information, a massive cordon and search operation was launched by 8 RR troops which included Ptr Mukut Bihari Meena.
Ptr Mukut Bihari Meena  and his comrades soon made contact with the militants in Kandi forest area, who fired at them on being challenged. A gun battle ensued thereafter, continuing for several hours. As the militants were trying to escape making use of the thick vegetation, the troops tightened the cordon to block the escape routes. However during the prolonged exchange of fire Ptr Mukut Bihari Meena sustained bullet injuries. He was given first aid and was shifted to the military hospital for further treatment. However he later succumbed to his injuries and was martyred. Ptr Mukut Bihari Meena was a brave and committed soldier who laid down his life at the age of 24 years in the service of the nation.
Ptr Mukut Bihari Meena is survived by his wife Smt Anjana Devi, daughter Aaru, father Shri Jagannath, mother Smt Ghisibai, brother Shri Shambhu Dayal and sisters Smt Kamlesh, Sugna & Kalibai.

A Tribute by the District Collector- Dr Jitendra Soni 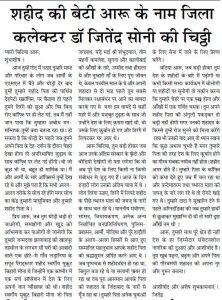