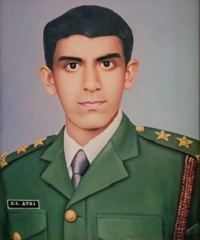 Lt Dheerendra Singh Atri was a 3rd generation soldier in uniform wherein his maternal grandfather was a World War 1 veteran and his father Brig Devendra Singh Atri was an infantry officer who served with the Rajput Regiment. Needless to say “Fauj” was in the DNA of Lt DS Atri, who always dreamt  of donning army uniform right from his younger days. Only son of his parents, he was born on September 12, 1978, at Mhow in Madhya Pradesh, where his father was then posted. He graduated in Hotel Management from Pusa Institute, New Delhi and worked as an Airport Manager at the Santa Cruz Airport in Bombay, but only for six months as he got selected to join the Army. Before passing out of the IMA on December 10, 2002, he had opted for Rajput Regiment as a parental claim but could not get it owing to lack of vacancies and was instead allotted Army Service Corps.

Immediately after commissioning, Lt DS Atri was posted to 3 Rajput Battalion on cross attachment for two years. As a subaltern, he took part in many anti-militancy operations and always led his men from the front. He always had one single order — “follow me”. During the attachment period, he applied for permanent secondment to the Rajput Regiment and also posting to the Rajput battalion his father had commanded. Though his application was being processed favorably, fate had something else in store for Lt DS Atri.

3 Rajput Battalion was inducted into Jammu and Kashmir in 2002 when the entire Kashmir valley was engulfed in militancy with Kupwara as the hotbed. As part of ‘Operation Rakshak’, the battalion was deployed in the Kupwara district to undertake counter-insurgency operations. The battalion troops were engaged in operations against the militants on a regular basis as a number of militants were active in its AOR(Area of Operation). One such operation was undertaken on 18 Oct 2003 under the leadership of Lt DS Atri. As the cordon and search operation by 3 Rajput was underway near the suspected area in the dense forest in Kupwara district, the troops led by Lt DS Atri came under heavy fire by militants waiting in ambush.

Unsurprisingly, without sparing even a single moment to think about his personal safety, Lt DS Atri charged at the militants, who were bringing down heavy fire on his ‘men’. As the militants directed fire at Lt DS Atri, his soldiers got crucial time to seek cover and reorganize to attack. He managed to kill two militants and caused disarray in the ranks of the militants. During this process Lt DS Atri too got seriously injured receiving multiple gun shots. Yet, determined to protect his men, he kept the militants engaged and soon eliminated one more militant before collapsing. Inspired by the daredevil action by Lt DS Atri, his comrades eliminated the remaining five terrorists too. Lt DS Atri later succumbed to his injuries and was martyred. Lt DS Atri was a valiant soldier and gritty officer who laid down his life at the age of 25 years in the line of his duty.

Lt DS Atri was given the nation’s second highest peacetime gallantry award, “Kirti Chakra” for his conspicuous act of gallantry, fighting spirit and supreme sacrifice. The award was received by his father Brig DS Atri, who was still serving in the Army at that time from the President Dr Abdul Kalam. Lt DS Atri is survived by his father an army veteran Brig DS Atri and mother Smt Kalpana Atri.

The battle account of his bravery in War Diary of 3 Rajput reads:

Lieutenant Dheerendra Singh Atri laid an ambush on an infiltration route in Kupwara district of Jammu and Kashmir. On October 18, 2003, at 2.30 am, the ambush party opened fire on a suspected movement of terrorists. At first light, Lt Atri led the search through dense forest. In the process, his party was fired upon by terrorists hiding in a nullah. Lt Atri reacted with such ferocity that not only he was able to kill two terrorists but also disintegrate their complete group. In the ensuing firefight, a splinter group of terrorists reached the shoulder of the nullah and from where they brought down effective fire, seriously injuring Lt Atri on the shoulder. At this juncture, unmindful of his own injury and determined to prevent terrorists from causing further harm to his party, Lt Atri charged and fatally injured one more terrorist, whose death was confirmed later. However, during the charge, Lt Atri  was hit on the chest by the terrorist’s burst fire and the brave Rajput succumbed to the fatal injury. Inspired by his gallant action, the troops killed five more terrorists, thus, eliminating the entire group of terrorists. In this operation, a large number of arms, ammunition and currency notes were recovered.

Smt Kalpana Atri, mother of  Lt. Dheerendra Atri, said, “ Every mother’s son has a date with fate. Our  Rinku (Lt. DS Atri), too, had his. But I am proud of my son for he met his date as a true Rajput and in the best traditions of the Indian Army ”.