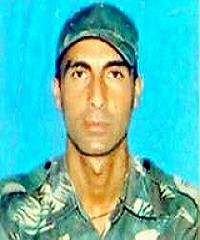 Ptr Shabir Ahmad Malik hailed from Ganderbal district of Jammu & Kashmir and was born on 21st March 1988. He grew up in Dab village in Ganderbal district of J&K and studied in Sainik School Manasbal up to Class XII. While studying in this school, his inclination to join the Armed Forces increased multifold and the foundation of his soldierly life was laid. Consequently, after finishing his school, he joined the army on 15th Mar 2007. He was recruited into the Parachute Regiment, an elite infantry regiment well-known for its awe-inspiring dare-devil operations.

Later he got selected to join 1 Para (SF) through a rigorous selection process and got trained as a commando. After completing his commando training, Ptr Shabir Ahmad got posted to a unit that was deployed in the Kupwara district of J&K as his first assignment. Having grown up in J&K, he was happy to serve in his home-land and soon became a source of inspiration for his village.

As the assault team was tracking an infiltrating column of terrorists, Ptr Shabir Ahmad observed suspicious movement and altered his commando buddy. But all of a sudden, the terrorists opened an overwhelming volume of fire from three directions injuring his buddy who received multiple gunshots. Ptr Shabir Ahmad quickly analyzed the gravity of the situation and swung into action in a bit to move his injured comrade to safety. Displaying commendable courage and dare-devilry, Ptr Shabir Ahmad used his field-craft skills to take on the militants. He crawled forward and charged at the militants lobbing grenades at them. During this process, he sustained serious gunshot wounds, but without caring for his own safety, he pulled his comrade to a safer place.

Continuing his charge, he killed another terrorist in hand to hand combat. He continued motivating his comrades for the firefight and refused evacuation. He later succumbed to his injuries and was martyred. Motivated by the courage and gallantry of Ptr Shabir Ahmad, the troops managed to eliminate many militants and made the operation successful. A large cache of arms and ammunition was recovered that included 17 assault rifles, four under-barrel grenade launchers,13 AK magazines, 207 AK ammunition, 19 UBGL grenades, two grenades, two global positioning systems, one Thuraya radio set, and Indian currency notes. Ptr Shabir Ahmad was a valiant and committed soldier who laid down his life at the age of 21-years in the line of his duty. Ironically he became a martyr on a day that happened to be his 21st birthday.

Paratrooper Shabir Ahmad Malik a fierce Patriot, willingly volunteered for Special Forces to fight terrorists in his beloved Kashmir. He further volunteered as a scout to lead his troops.

On 21st March2009, his troops was tracking an infritrating column of terrorists when he observed suspicious movement and altered his commando buddy. suddenly the terrorists opened overwhelming volume of fire from three directions and his buddy received gunshot wounds. Sensing grave danger to his comrades, he displayed exceptional courage with total disregard to his safety by lobbying grenades, crawling and charging onto the terrorists, killing one at point blank range. During this fire fight, he sustained serious gunshot wounds but pulled his buddy to safety. Despite being grievously wounded he killed another terrorist in hand to hand combat and refused evacuation motivating his comrades during the fire fight. His supreme sacrifice led to the rare scenes of Kashmir Valley mourning’s footsteps.

Ptr Shabbir Malik’s elder brother Shri Ghulam Mohammad has named his son after him. While paying tribute his younger brother, he said, “He was always yearning to do something for his country. He studied in Sainik School, Manasbal, upto class XII and then joined the army where he was trained as a commando. We feel pained by his death but are also honoured that he made his family and country proud”.