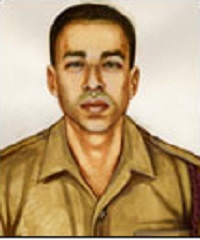 Paratrooper Sanjog Chhetri was born on 26 Jan 1982 in Bomtaal village in Southern Sikkim.  At a very young Ptr Chhetri lost his father and he and his sister Sangeeta were brought up by his uncle. Ptr Chhetri was very brave since his childhood and always wanted to serve in the Armed Forces. He joined the Army on 31 March 2001 at the age of 19 years and was recruited into the Parachute Regiment, a regiment known for its gallant soldiers and daredevil operations. Later he was selected for the Special Forces and joined 9 Para(SF), the elite force of the Parachute Regiment.

During 2003, Ptr Sanjog Chhetri’s unit was deployed in J & K  and was involved in counter-insurgency operations on a regular basis. On 22nd April 2003, information was received from the intelligence sources about the presence of some hard core terrorists in Hill Kaka area. After analyzing the available inputs an operation was planned by 9 Para(SF) to flush out the terrorists. An assault team comprising 20 commandos was selected for the operation which was code named “Op Sarp Vinaash”.  Ptr Sanjog Chhetri was one of commandos selected for the critical operation.

The assault team swung into action as per the plan and cordoned off the suspected area. However as the commandos moved forward and approached the terrorists hideout, they were fired at by the terrorists. A fierce gun battle ensued thereafter with heavy exchange of fire by automatic weapons. The heavily armed terrorists were firing from safe places and posing serious threat to the troops out in the open. At one point Ptr Sanjog Chhetri realized that his comrades were in direct line of fire and were in danger. He, in a rare display of raw courage crawled a distance of nearly 100 yards and attacked the terrorists by firing from close range and killed one terrorist.

Paratrooper Sanjog Chhetri is survived by his sister Sangeeta.

On 22 April 2003, he led a team of 20 commandoes in carrying out operations in the terrorist location at Hill Kaka in Jammu and Kashmir. The commandos approached the terrorist hideout and drew heavy automatic fire. Sensing danger for his fellow commandoes, Ptr Sanjog Chhetri assaulted the mountain hideout after crawling 100 yards and killed one terrorist. Despite the gunshot wounds he sustained and the profuse bleeding, Ptr Chhetri killed one more terrorist and offered an opportunity for his team to engage the remaining terrorists effectively. The commando team killed all the remaining terrorists. Ptr Chhetri later succumbed to his injuries. For his bravery, he was posthumously awarded the Ashoka Chakra, the highest peace time military decoration in India.