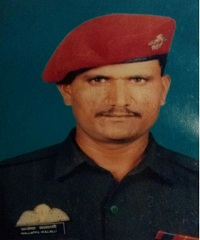 Paratrooper Mallappa Hullalli hailed from Bagalkote district of Karnataka and was born on 1st  January 1973. His parents were Veeresh and Gouramma. Mallappa was last among the four siblings. He had completed his eduaction in his home town Bagalkote and after completing his second year PUC  joined the Indian Army  in  1994 when he was 19 years old.

He was enrolled in Parachute Regiment known for its valour and various battle honours. He  was a disciplined and committed soldier. By 2001 Paratrooper Mallappa Hullali  had put in 6 years of service and had experience of serving in various tough operation areas. He got married to Lakshmi Bai in 2000 and the couple could spent only one year of their married life together.

He was posted in Jammu area during 2001. On 14th of July 2001, he was martyred in a Pakistani firing. A brave soldier, laid down his life in the line of duty. He is survived by his wife Lakshmi Bai.