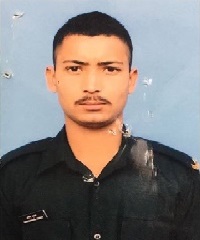 Paratrooper Dharmendra Kumar was born on March 15, 1991 and hailed from Pataliya village in Block Kotabagh of Nainital district in Uttarakhand. Son of Shri Mohanlal Shah and Smt Savitri Devi, Ptr Dharmendra did his primary schooling at Kashipur, Nainital while his father was working in a Textile Mill. Due to some reason, the textile mill was shut down and his father had to come back to his village to start afresh. Paratrooper Dharmendra Kumar completed his schooling from class 6th to 10th from the government school at his village. After passing his class 12th in 2010, he cleared the exam for Uttarakhand Police but turned down the offer to pursue his ultimate dream to be a part of Indian Army.
Finally, after 4 years of dedication and hard work, his dream came true in 2012 when he joined the Indian Army. He was recruited into 29 Para of the Parachute Regiment known for its gallant soldiers and many daredevil operations. Everyone in his family was very happy for his achievement, especially his father, uncle and cousins who were not lucky enough to join the Army. He was the inspiration for many young people to join the Army in that area. The young paratrooper, at a very early age of 26 years established himself amongst his comrades as a spirited and daring soldier while serving with 31 RR unit deployed in J & K area in 2017.
Bandipora Operation: 14 Feb 2017
During Feb 2017, Ptr Dharmendra Kumar’s unit was deployed in Bandipora district of J&K. On 13 Feb, the unit received information from the intelligence sources about the presence of some hard core militants hiding in a locality falling in its AOR(Area of Responsibility). As a result, on the early morning of Feb 14, 2017, Ptr Dharmendra Kumar’s unit 31 Rashtriya Rifles, the Special Operation Group of J&K Police and the CRPF launched an operation in the Parray Mollah locality in Bandipora to nab militants hiding in a two-storeyed house. While the forces were conducting the search operation, the hiding militants fired upon them, and a fierce gun battle ensued thereafter.
During the heavy exchange of fire, fifteen security personnel including Ptr Dharmendra Kumar, Rifleman Ravi Kumar and Gunner Astosh Kumar got injured and they were airlifted to an army hospital in Srinagar. In this operation, several terrorists including one top LeT commander were neutralized. However, Ptr Dharmendra Kumar, Rifleman Ravi Kumar and Gunner Astosh Kumar later succumbed to their injuries and were martyred. Ptr Dharmendra Kumar was a brave and dedicated soldier who laid down his life in the service of the nation before he even could turn 26.
Paratrooper Dharmendra Kumar is survived by his mother Smt Savitri Devi, father Sri Mohanlal Shah, two brothers Pavan Kumar Shah and Deepak Kumar Shah.