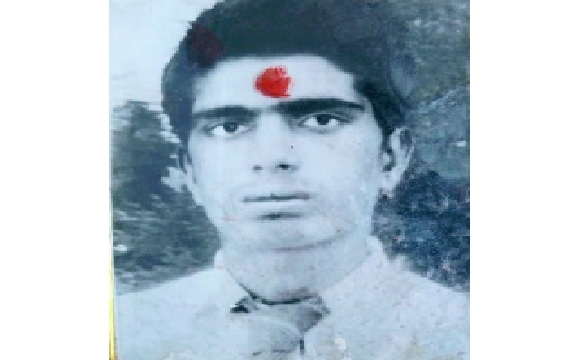 OD Shambhu Singh hailed from Parli village of Malpura tehsil in Tonk district of Rajasthan and was born on 30 Jul 1943. Son of Shri Kalyan Singh and Smt Bhanwar Kanar Singh, he joined Indian Navy in Dec 1959 at the age of 16 years.  After completing his training, he got posted to INS Circars, the oldest establishment on the Eastern seaboard and the flag ship of the Flag Officer Commanding-in-Chief, Eastern Naval Command. The establishment was commissioned as a small base on 12 Dec 1939 during the initial phase of the Second World War with an officer designated as Senior Naval Officer, Visakhapatnam, whose jurisdiction extended from the port of Baruva in the North to Vadarevu in the South. With expansion of naval support facilities, the need to have a Naval Operational Repair Organisation was felt increasingly. Thus, HMIS Circars came into being as a refitting and operational establishment on 12 Apr 1942. Over the years, the role of INS Circars changed from coordinating Naval Operations to functioning as a Repair Organization to being an establishment for Boys Training. OD Shambhu Singh served with INS Circars for over two years till Dec 1960.

Later OD Shambhu Singh got posted to serve with INS Angre, the shore based logistics and administrative support establishment of the Western Naval Command. This establishment carried out the duties and functions of the base depot ship for the Command. The establishment also known as the Naval Barracks and provided multifarious facilities to all ships and units based at Mumbai. Subsequently in Feb 1961, OD Shambhu Singh was posted to serve with INS Mysore, a Fiji-class cruiser commissioned in the Indian Navy in 1957. INS Mysore later became part of the Naval task force and took part in 'Operation Vijay' in the liberation of Goa, Daman and Div.

As years of negotiation did not yield any result, the Indian government decided to deploy the armed forces in an effort to evict the Portuguese out of Goa and other Enclaves. Consequently in November 1961, Lt Gen Chaudhari of the Southern Army deputed 17 Infantry Division under Major General KP Candeth along with the 50th Para Brigade to carry out the task of liberating Goa , Daman and Diu.  The air operations were delegated to Air Vice Marshal Erlic Pinto and the Navy was entrusted to create a suitable Task Force to support the operations.  The main tasks assigned to the Navy included establishing effective control of the seaward approaches to Murmagao Bay and Aguada, Daman and Diu, capturing of Anjadiv Island, neutralizing enemy coastal batteries and sinking or immobilizing units of the Portuguese Navy in and around Goa. OD Shambhu Singh aboard INS Mysore took part in capturing Anjadiv Island.

Apart from actions of the Navy in Daman and Diu, the operations off the Goa coast were launched, to secure access to the Mormugao Harbour and to capture Anjadiv Island. At that time the Portuguese ship 'Afanso de Albuquerque' was anchored off the harbour.  At 1200 hrs on 18 December, INS Mysore and two other Indian Frigates led by INS Betwa took on Afanso after the harbour had been bombed by the IAF. The warning shots asking the Afanso to surrender were answered by fire from her 120 mm Guns. Despite being outnumbered and placed in a disadvantageous position, the engagement continued for fifty minutes, wherein the Afanso took several hits and was ultimately abandoned.  Concurrently, Anjadiv Island was also stormed. The Naval landing party under Lieutenant Arun Auditto was duped by displaying a White flag and was fired upon. During this firing, OD Shambhu Singh and several other sailors got severely injured.  Later OD Shambhu Singh succumbed to his injuries and was martyred.  OD Shambhu Singh was a brave and committed sailor who laid down his life at the age of 18 years in the service of the nation.