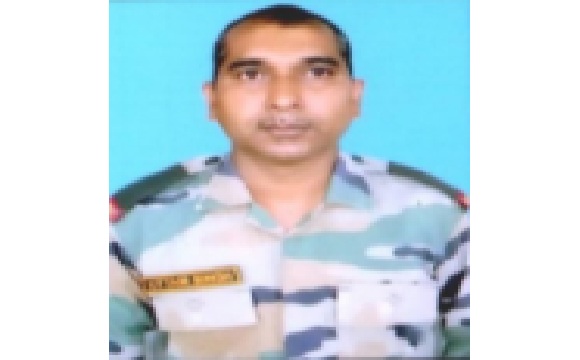 Place of birth : Sultanpur Dist, (UP)

Naik Uttam Singh hailed from Gunge Mau village of Musafir Khana tehsil in Sultanpur district of Uttar Pradesh. Son of Late Shri Dan Bahadur Singh and Smt Sabarmati Singh, Naik Uttam Singh had a brother Praveen Singh as his sibling. After completing his initial school education he joined the army in the year 2005 at the age of 19 years. He was recruited into the 11 Mahar Battalion of the Mahar Regiment, a regiment of the Infantry known for its fearless soldiers and numerous battle honours.

After serving for few years, he got married to Ms Ragini Singh and the couple had two sons Nirvan Singh and Parth Singh. By the year 2020, he had put in around 15 years of service and had been promoted to the rank of Naik.

During 2020, Naik Uttam Singh’s unit 11 Mahar was deployed in the Baramulla district of J & K and was engaged in counter-insurgency operations at a regular frequency. The unit was deployed in the high-altitude area along the LOC and was manning the forward posts along the border. Besides manning the posts, the troops launched regular armed patrols to monitor the area between the posts. The patrol routes often passed through inaccessible areas coupled with hostile terrain and weather conditions. Nk Uttam Singh was part of one such patrol on 18 Apr 2020 in Uri sector of Baramulla district along the LOC.