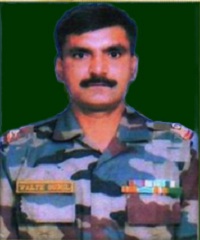 Naib Subedar Sunil Ravsaheb Valte hailed from  Dahigaon village in Ahmednagar district in Maharashtra. He joined the army in the year 1998 and was recruited into 24 MLI of the Maratha Light Infantry Regiment, an infantry regiment well known for its brave soldiers. By the year 2019, Nb Sub Sunil Ravsaheb Valte had put in about 21 years of service and had developed into a battle-hardened soldier.   After gathering substantial experience, he later got promoted to a Junior Commissioned Officer (JCO). After serving a few years he got married to Ms. Mangala and they had a son and a daughter.

During Oct 2019, Nb Sub Sunil Ravsaheb Valte was serving with 24 MLI and the unit was deployed in Rajouri district of J&K. The unit troops were manning the forward posts in the Nowshera sector along the LOC. This sector was very volatile as the enemy forces often resorted to unprovoked firing at the forward posts. The unit troops had to maintain a very high state of preparedness to give a befitting reply to the cross-border firing. The firing from across the border was invariably planed to give cover fire to infiltrators. On 22 Oct 2019, a suspicious movement was noticed by the soldiers in the Nowshera sector which was accompanied by heavy shelling from across the border.