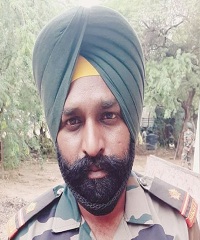 Naib Subedar Rajwinder Singh hailed from Goindwal Sahib village in Khadoor Sahib tehsil of Taran Taran district in Punjab. Son of an army veteran Hav Jagir Singh and Smt Balwinder Kaur, Nb Sub Rajwinder Singh had a younger brother Sukhwinder Singh, who too served in the Army but died in a road accident in the year 2009. Born in the year 1980, Nb Sub Rajwinder Singh always wanted to serve in the Army like his father since his younger days. He eventually joined the Army after completing his school education at the age of 20 years. He was recruited into 1 Sikh LI of the Sikh Light Infantry Regiment, an infantry Regiment known for its brave soldiers and rich history of various battle honours.

After serving for few years, he got married to Ms. Manpreet Kaur and the couple had two daughters Pawandeep Kaur & Akshjot Kaur and a son Jobanjit Singh. By the year 2020, he had been promoted to the rank of Naib Subedar and had developed into a battle-hardened soldier and a very dependable junior commissioned officer. He had served in various operational areas by then and gathered substantial field experience.

On 30 Aug 2020, in the afternoon Pakistan Army troops initiated unprovoked firing on Indian posts from across the border in Nowshera Sector of Rajouri district. During that period, Nb Sub Rajwinder Singh was supervising the forward posts along the Line of Control in the Nowshera sector. The Pakistani troops violated the ceasefire and resorted to heavy cross border firing using small arms at Khanger, Kalsian and Bhawani along the LOC. Indian army responded in a befitting manner to the Pakistani aggression and consequently, a heavy exchange of fire ensued thereafter, which continued intermittently for several hours. However, during this heavy exchange of fire, Nb Sub Rajwinder Singh got severely injured. He later succumbed to his injuries and was martyred. Nb Sub Rajwinder Singh was a valiant soldier and a committed junior commissioned officer, who laid down his life in the line of his duty.