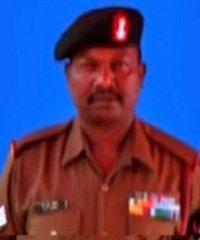 Nb Sub Nandu Ram Soren hailed from Bada Champauda village of Bijatala block in Mayurbhanj district of Odisha. Son of Shri Kahanu Soren amd Smt Raimath Soren, he was born on 02 Apr 1977 and was the youngest among four siblings. He joined the Army on 27 Apr 1996 at the age of 19 years after completing his education at Rairangpur College. He was recruited into the 16 Bihar battalion of the Bihar Regiment, an infantry Regiment well known for its fearless soldiers and numerous battle exploits. After serving for a few years he got married to Ms. Laxmimani and the couple had three daughters Gyaneshwari, Maansi, and Sonali.

Besides having soldierly skills, he was a keen sportsman and excelled in football and hockey. He was a cross country runner too and took part in various regimental competitions. He was a caring father and a family man who took care of his other family members too. By the year 2020, he had put in over 22 years of service and had been promoted to the rank of Naib Subedar. In the service career spanning over two decades, Nb Sub Nandu Ram Soren had served in various operational areas and developed into a professionally competent and dependable junior commissioned officer.

During June 2020, Nb Sub Nandu Ram Soren’s unit 16 Bihar was deployed in eastern Ladakh close to the Line of Actual Control(LAC) as part of Operation Snow Leopard. Since early June the tension along the LAC was building up due to construction work in Galwan valley close to the road going from Leh to Daulat Beg Oldie. The Chinese had a serious objection to the construction of a bridge across the Galwan river into the Aksai Chin area. The area held strategic importance to India as well as China as it dominated the road from Leh to Daulat Beg Oldie an airstrip of great military significance to India. There had been many rounds of talks between senior military officials from both sides to diffuse the tensions. On 15/16 June 2020 night, hectic Chinese activities were noticed across the bridge in Galwan valley and the Indian Army decided to take up the matter with Chinese forces to ask them to respect the LAC and adhere to the position as agreed earlier during the talks.

Considering the gravity of the situation, Col Santosh Babu the Commanding Officer of 16 Bihar battalion deployed in the area decided to lead the negotiations. However, an altercation during the discussion raised the tempers leading to a scuffle. Soon the scuffle turned into a violent clash with the Chinese soldiers attacking Col Santosh Babu and his men with deadly clubs and rods. The Indian soldiers were greatly outnumbered and the Chinese soldiers seemed to be prepared for the attack. As the clashes escalated Nb Sub Nandu Ram Soren and other soldiers joined the beleaguered Indian troops to take on the Chinese soldiers. The clashes went on for many hours during which many Indian soldiers including Nb Sub Satnam Singh got seriously injured. Nb Sub Nandu Ram Soren, the CO, Col Santosh Babu, and 18 other soldiers later succumbed to their injuries and were martyred. The other brave hearts included Nb Sub Mandeep Singh, Hav Bipul Roy, Hav Sunil Kumar, Hav K Palani, Naik Deepak Singh, Sep Ganesh Hansda, Sep Chandan Kumar, Sep CK Pradhan, Sep Aman Kumar, Sep Kundan Kumar, Sep Rajesh Orang, Sep Ganesh Ram, Sep KK Ojha, Sep Jai Kishore Singh, Sep Gurtej Singh, Sep Ankush, and Sep Gurbinder Singh. Nb Sub Nandu Ram Soren was a gallant soldier and a committed JCO who laid down his life in the line of his duty. Nb Sub Nandu Ram Soren was given the gallantry award, “Vir Chakra” on 26 Jan 2021 for his exceptional courage, determination, devotion to duty, and supreme sacrifice.

Naib Subedar Nuduram Soren was part of Operation Snow Leopard, in Galwan Valley (Eastern Ladakh). On 15 June 2020, during a skirmish with the enemy, he led a column. He inspired his forces to hold ground at all costs and kept the enemy from pushing back Indian soldiers. In the skirmish, his ability to lead from the front stood out, so much so, the enemy viewed him as a threat. He was then targeted with lethal weapons and stones by the enemy.

He was seriously wounded as a result of this attack, but before achieving martyrdom, he managed to hold his ground with a resolute and indefatigable spirit. This supreme sacrifice inspired their own troops to unite and fight, thereby stalling the aggression of the enemy.

In recognition of his act of bravery in face of the enemy, courage, and supreme sacrifice, Naib Subedar Nuduram Soren is awarded “VIR CHAKRA (POSTHUMOUS)”.