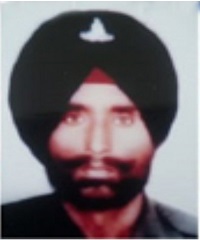 Nb Sub Ajit Singh hailed from Dakoha village in Jalandhar district of Punjab. Son of Shri Sardar Harbans Singh and Smt Yashpal Kaur, he was inclined to join the Army since his younger days. Eventually Nb Sub Ajit Singh joined the army in 1976, after his initial education. He was recruited into 305 Medium Regiment of the Regiment of Artillery, one of the important combat arms of the Indian Army, which provides firepower during ground operations. By the year 1999, he had put in over two decades of service and had been promoted to the rank of Naib Subedar.

During Aug 1999, Nb Sub Ajit Singh's unit 305 Med Regt was deployed in J & K along the LOC. Though the Kargil war had ended officially on 26 July 1999, the situation along the LOC continued to remain tense during Aug 1999 too. Besides facing unprovoked firing from across the border, the AOR(Area of Operations) of the unit also fell into the region affected with active militancy which demanded 'high alert' at all times on the part of the troops.

On 20 Aug 1999, Pakistani troops initiated unprovoked firing on Indian posts from across the border. Pakistani soldiers violated the ceasefire and resorted to unprovoked firing using small arms, automatics, and mortars. Nb Sub Ajit Singh’s unit was manning one of the forward posts in that sector. Indian forces retaliated forcefully against the ceasefire violation and the cross border firing continued for several hours. However, during the exchange of fire, Nb Sub Ajit Singh got grievously injured and was immediately shifted to the hospital at the nearby Army base. However, Nb Sub Ajit Singh later succumbed to his injuries and was martyred. Nb Sub Ajit Singh was a valiant and committed Junior Commissioned Officer, who laid down his life in the service of the nation.