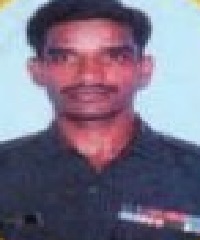 Naik Ganesh Prasad Yadav was born on Feburary 19, 1971 in Pandeychak village in Patna district, Bihar. He was the son of Ramdeo Prasad. He was belong to 1 Bihar Regiment.

On 28 May 1999, During “Operation Vijay”, Naik Ganesh Prasad Yadav belonged to Charlie Company which was assigned the task of capturing point 4268, a well- fortified enemy post at an altitude of 14000 feet in Batalik sub-sector of Kargil.

Naik Ganesh Prasad Yadav is survived by his father Ramdeo Prasad, and his wife Pushapa Rai, and son Abhishek.

The Citation for Vir Chakra Award reads him to:-

Naik Ganesh Prasad Yadav beloged to Charlie Company which was assigned the task of capturing Point 4268, a well fortified enemy post at an attitude of 14000 feet in Batalik Sub Sector of Kargil on 28th May 1999 during operation vijay,

After an approach march of four hours at 0400 hours on 29th may 1999 the assault was launched on the enemy. Naik Ganesh Prasad Yadav was in forefront of the assault under heavy volume of enemy artillery and small fire. With his indomitable courage fighting spirit and determination he charged at the enemy sangar with utter disregard to his personal safety and killed two foreign mercenaries.

Naik Ganesh Prasad Yadav was seriously wounded in the hip by a volley of bullets. Despite being injured the brave soldier, unmindfully of the danger to his own life continued to fire at the enemy till he succumbed to his injury.

Naik Ganesh Prasad Yadav displayed most conspicuous act of gallantry in the face of enemy amd made the supreme sacrifice.