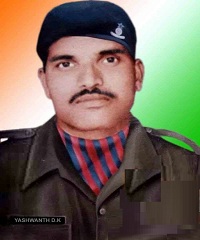 Naik Yeshwanth Durgappa Kolkar was born on 08th December 1965 in Melkalamardi village in Belagavi district of Karnataka. Son of Sri Durgappa and Smt Nagavva, Naik Yashwanth Durgappa was the third among his nine siblings. He did his schooling from Vidya Mandir High school and after finishing his secondary education he joined the Indian Army. He was recruited at Nasik center and was inducted into the Regiment of Artillery on 30 July 1983.

Naik Yeshwanth Durgappa Kolkar served in various operational areas during his service career and had developed into a professionally competent and dedicated soldier. By 1999, Naik Yashwanth Durgappa had put in close to 15 years of service in the Army and had evolved into an experienced “gunner” as a soldier from the Artillery Regiment is known as. He got married to Savithri in the year 1993 and the couple had two kids Yeshoda and Sandeep.

During the year 1999, Naik Yashwanth Durgappa was posted at a peace location in Uttarakhand, however, with the beginning of Kargil operations his unit was tasked to move to Jammu and Kashmir for operational deployment. The artillery firepower plays a major part in achieving victory on the modern battlefield. Accurate artillery fire reduces the enemy’s defences which gradually wears the enemy’s resistance and ultimately breaks their will to fight. By systematically degrading the enemy’s fighting potential before a physical assault is launched, the artillery helps to reduce the casualties suffered by assaulting infantrymen. On 03 July 1999, Naik Yashwanth Durgappa’s unit was part of the Artillery fire plan for the capture of the Tiger hill a strategic objective for the Army.   The artillery fire plan for the assault on Tiger Hill was aptly code named as the ‘Final Blow’. 20 fire units (120 guns and mortars) and a troop of MBRL(Multi barrel rocket launcher) participated in the battle.

As in the capture of Tololing heights, a significant part of the fire plan, was the employment of Bofors guns, and the MBRLs in direct firing role. Direct firing was conducted from a distance of nearly 10,000 m, with the Bofors deployed in three tiers, employing “Shoot and Scoot” tactics, to avoid damage by the enemy’. The Artillery firing continued till the gallant men of 18 Grenadiers asked to stop the firing as they were closing in to the objective. The tiger hill was eventually captured by the Infantry with ably supported by the Artillery . However, Naik Yashwanth Durgappa got injured in the enemy counter bombardment and later succumbed to his injuries. He was a valiant and committed soldier who laid down his life in the service of the nation.