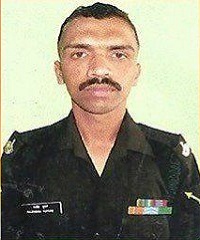 Naik Tupare Rajendra was born in the year  1983 in Karve village in Kolhapur district of Maharashtra. In 2002, Naik Tupare joined the Indian Army and was recruited into the Maratha Light Infantry, the regiment known for his valiant soldiers and various battle honours. His first posting was at Belgaum located in Karnataka and later he served at various places during his 14 years service in the army.

During 2016, Naik Tupare Rajendra’s unit was deployed in the Line of Control in Poonch Sector of J &K. India shares a 3,323-km border with Pakistan, of which 221 km of the IB and 740 km of the LOC fall in Jammu and Kashmir. As in the previous years, the LOC was highly active and volatile where ceasefire violations occurred very often and without any warning. It was also used by the terrorists for infiltration with the connivance of Pakistani security forces.

On 6th November the alert and vigilant troops of Naik Tupare Rajendra’s unit observed some suspicious movements around midnight and challenged the infiltrating terrorists. On being challenged, the terrorists opened fire and tried sneaking back into the Pakistan-occupied-Kashmir (PoK) side of LoC. Naik Tupare and his comrades continued to engage the terrorists and took immediate measures to block their escape routes. In the ensuing firefight Naik Tupare and one more Sepoy suffered gunshot wounds and got severely injured. They were evacuated to the nearby medical facility, however they succumbed to their injuries on the way on 7th November. Naik Tupare Rajendra was a valiant solider, who at the age of 33 years laid down his life in the service of the nation.

Naik Tupare Rajendra is survived by his wife Smt Sharmila and two sons Aryan and Vaibhav.