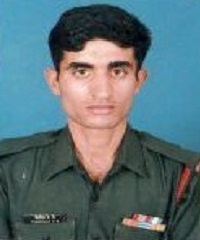 Naik Thimmaiah KK was born in Coorg in Karnataka on 10th May 1974.  He completed his graduation at Coorg and joined the Army on 15th December 1993. After his training he joined 9 Madras unit of the famed the Madras Regiment and  served with the unit from 01 December 1994 to 7th October 1997. Naik Thimmaiah  during his service career participated in numerous operations from 1997 to 2007 and proved his mettle as a brave and a committed soldier.

Naik Thimmaiah evolved into a battle-hardened soldier by his involvement in various operations in different terrain and environment. His operational experience included participation in Op Rakshak from 12th December 1994 to 7th October  1997, Op Meghdoot From 10th October 2000 to  30th July 2001, Op Parakram  4th January 2002 to 12th October 2002 and Op Rakshak from 8th July 2005 to 24th July 2007.

During his service life, Naik Thimmaiah demonstrated a high level of commitment and courage in carrying out the assigned tasks. This was evident from the appreciation he earned from his seniors and accolades received in the form of, Special Service Medal, High Altitude Medal, Siachen Glacier Medal, Op Vijay Medal, Badge of Sacrifice and Veerputra award from ISBR Business School, Bangalore.

Naik Thimmaiah got married to Asha CT on 19th May 2005 and had a daughter Deeya who was born on 28th June 2006. Naik Thimmaiah was martyred on 24 July 2007, when his daughter was barely one year old.

During 2007, Naik Thimmaiah was on deputation to serve with 25 RR unit engaged in anti-terrorist operations in J & K area. On 20 July 2007, during Op Rakshak, Naik Thimmaiah along with comrades was passing through a militant-infested area in Poonch district of J & K. The convoy of the soldiers was attacked by the terrorists hiding in the nearby forest area. Though it was a surprise attack, the troops rose to the occasion and in a swift action counterattacked. A fierce gun-battle ensued thereafter with the heavy exchange of fire. However, during the attack, Naik Thimmaiah received gunshots on his neck, right thigh and hips and was grievously injured. He was shifted to the military hospital but finally succumbed to his injuries and was martyred on 24 July 2007.

Naik Thimmaiah was a gallant and dedicated soldier who laid down his life in the service of the nation. Naik Thimmaiah is survived by his wife Asha and daughter Deeya.