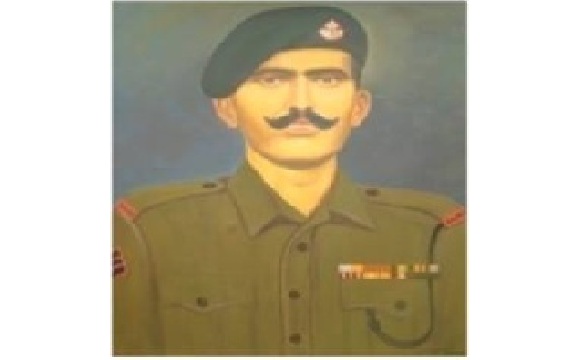 Naik Sugan Singh was born on 6th March 1942, at Ishar Navra village in Kheenvsar Tehsil of Nagaur district in Rajasthan. Son of Shri Abey Singh and Smt Kishna Kanwar, Naik Sugan Singh joined the Indian Army on 6th March 1962 at the age of 20 years. He was enrolled into 7 Raj Rif of the Rajputana Rifles Regiment, one of the oldest infantry Regiments of Indian Army and well known for its gallant soldiers.

By the year 1971, he had put in around 9 years of service and had been promoted to the rank of Naik. By then he had served in various field areas and gained the field-craft skills required to be a battle-ready soldier.

Prior to the outbreak of open hostilities on 03 Dec 1971 with Pakistan, 7 Raj Rif had got deployed on the eastern border and got involved in active operations when hostilities actually commenced. 7 Raj Rif was part of 61 Mountain Brigade functioning under the operational control of 4 Corps. As part of ongoing operations, 7 Raj Rif was tasked to capture Mynamati, an important garrison developed for the defence of politically significant town of Comilla. On the 09th Dec Naik Sugan Singh 's Battalion 7 Raj Rif was tasked to attack the enemy defences at Mynamati, which comprised well prepared concrete bunkers housing medium machine guns whose crossfire covered every possible approach. Naik Sugan Singh was commanding the section of the platoon that was part of this operation.

As the assaulting troops closed onto the objective, two enemy Medium Machine Guns opened fire and held up the assault. In a daring move, Naik Sugan Singh charged at one of them though he received a burst on his shoulder. Although bleeding profusely, he crawled up to the bunker and lobbed a hand grenade killing two enemy soldiers. Despite the grave injuries, he charged at the second enemy Medium Machine Gun and pushed a grenade into the bunker killing three of the enemy soldiers. However eventually he succumbed to his injuries and was martyred on the battle-field. Naik Sugan Singh was a fearless and committed soldier who laid down his life in the line of his duty.

On the 09th December 1971 a Battalion of the Rajputana Rifles were ordered to attack the enemy defences at Maynamati, which comprised well prepared concrete bunkers housing medium machine guns whose crossfire covered every possible approach. Naik Sugan Singh was commanding one of the assaulting sections. When the assaulting troops closed on the objective, two medium machine guns opened fire and held up the assault. Naik Sugan Singh charged at one of them. He received a burst in his shoulder. Although bleeding profusely, he crawled up to the bunker and lobbed a hand grenade killing two men. Although he had bled profusely, he charged at the second medium machine gun; he could not carry himself far and fell down. But undeterred, he pushed a grenade into the bunker killing three of the enemy. He himself was also killed.